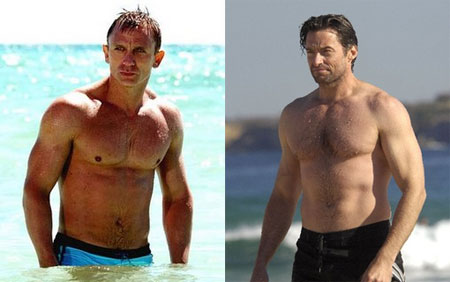 oh Goodness– HOW did these photos get on here?!

Let’s try this again shall we?

Went to see Daniel Craig and Hugh Jackman in “A Steady Rain” on Broadway last night. 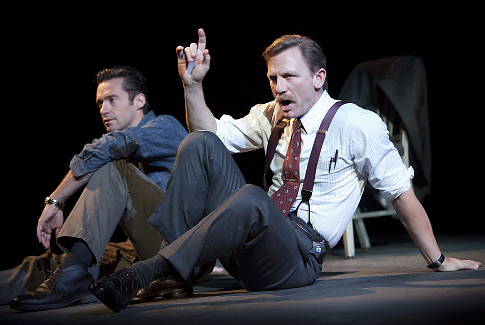 It’s a melodrama about two Chicago cops whose life-long friendship is severely challenged by dare I say, a whole shite-load of heavy circumstances that strain both the characters and the play to the breaking point.  Having said that, I thought both performances were stellar.  Considering the huge amount of dialogue, the fact that there are only two characters, both on stage for the entire 90 minutes (no intermission) AND neither Craig or Jackman broke from their Chicago accents once, both were very impressive.  I’ve been a fan of Daniel Craig’s for a while but embarrassed to admit, was not familiar with Hugh Jackman’s work. I know, right?- where have I been?  What was interesting to me was that I actually preferred Jackman’s performance, while my husband and son felt the opposite.  Afterwards, with their adorable British and Australian accents, they charmingly auctioned off the sweaty wife-beaters they wore under their shirts in order to raise (a lot) of money for Broadway Cares.  Now here’s where the melodrama really kicks in; My husband didn’t e v e n buy me one.  Whatever.  No biggie.

Noooo biggie at all…

PS. Yet ANOTHER audience member’s cell phone went off during a very crucial scene- WTF is wrong with people?? They remind you at least SIX times to turn your phones off.  Soon I bet they will confiscate all phones going in, give you a ticket for it and you will have to stand in line at the end of the show with your ticket stub to retrieve your precious binky!  Trust me, this has happened to me already in Los Angeles at a movie screening and people were not happy.  Hard to imagine attitude at an LA movie screening, I know.