May I be the very first, the leader of the pack as it were, to inspire you for next Thanksgiving?! 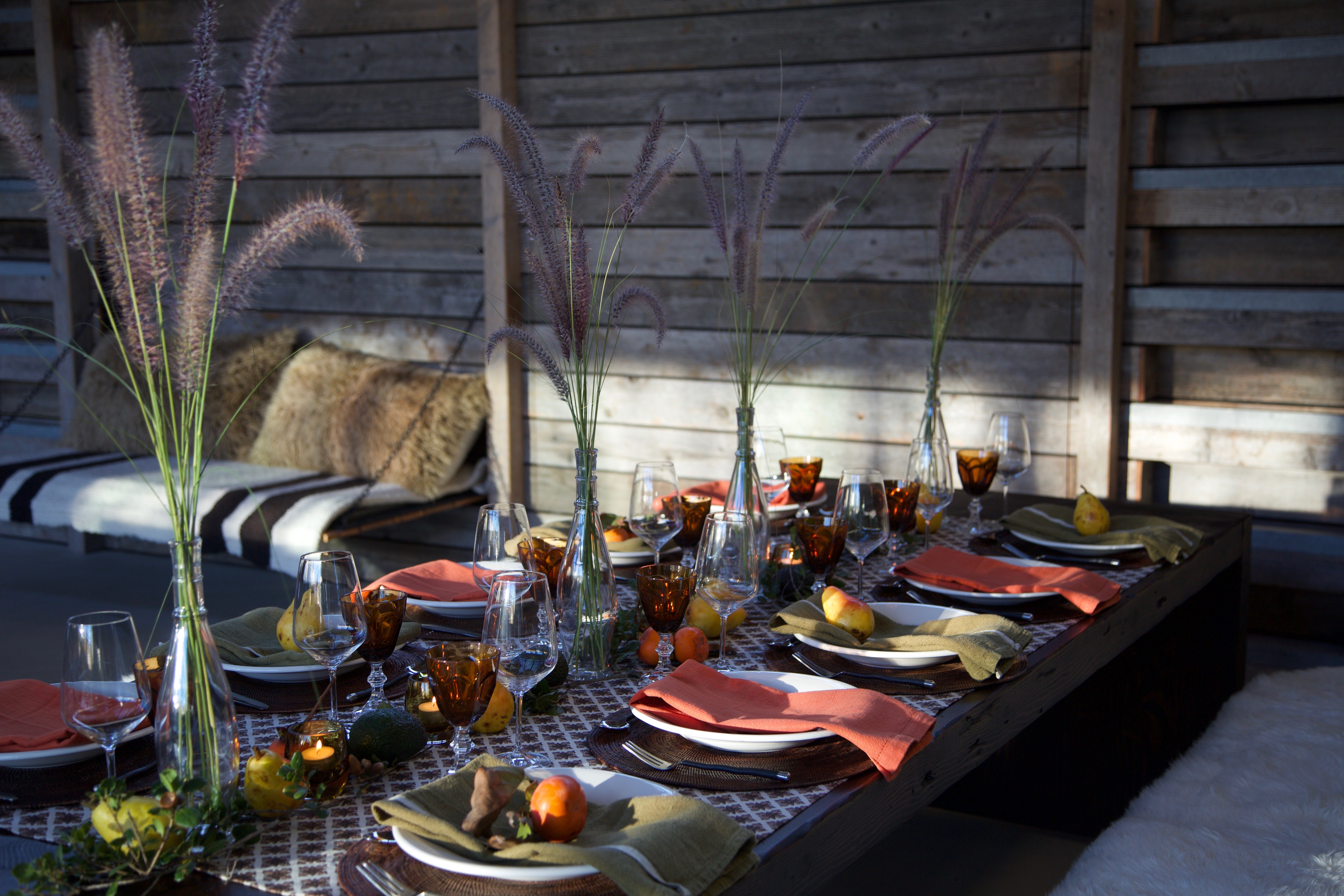 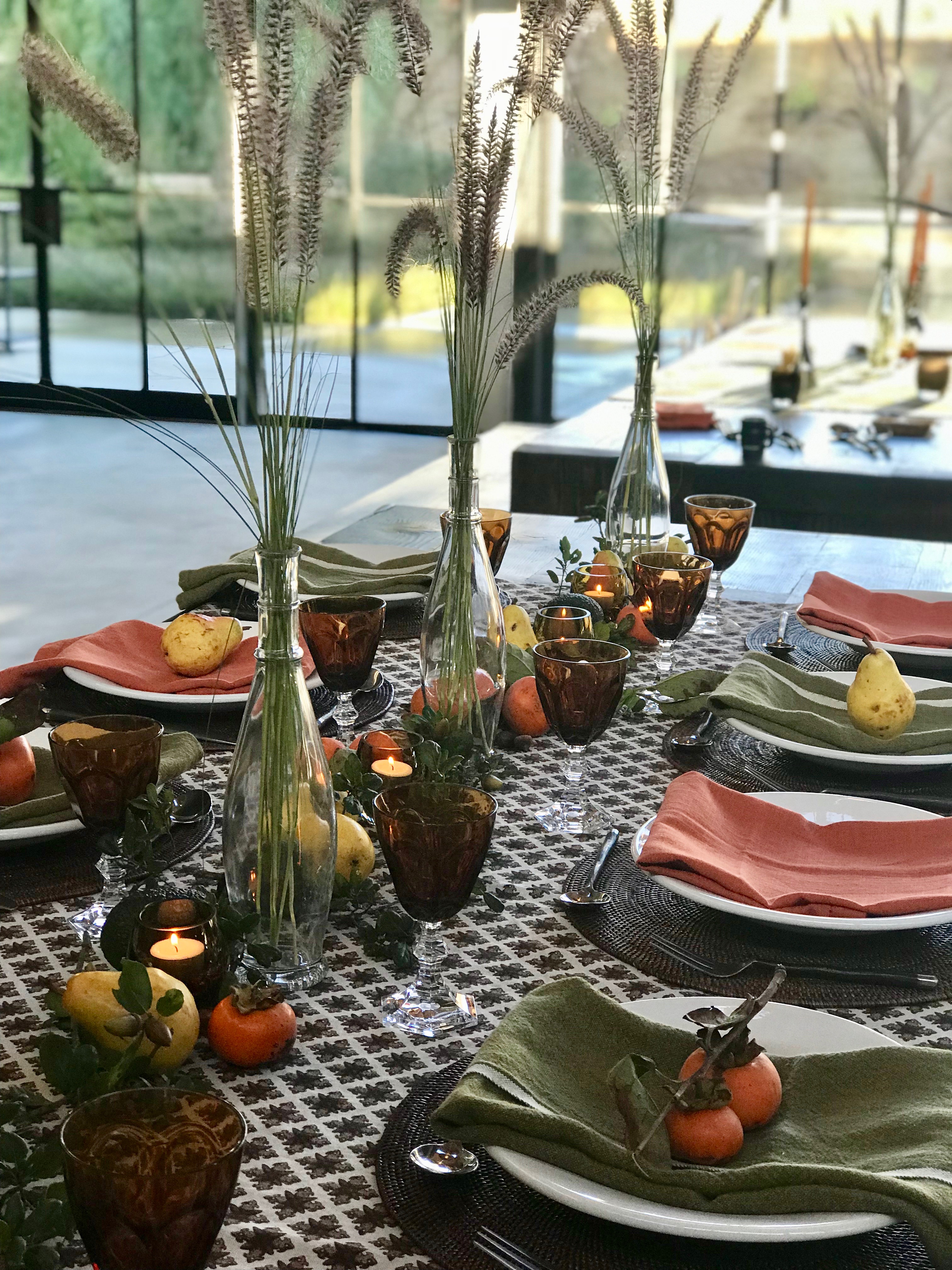 Because really one can never be too organized imho.  That’s certainly how I like to roll (just go along with me)  I also wanted to take the weekend off 🙂 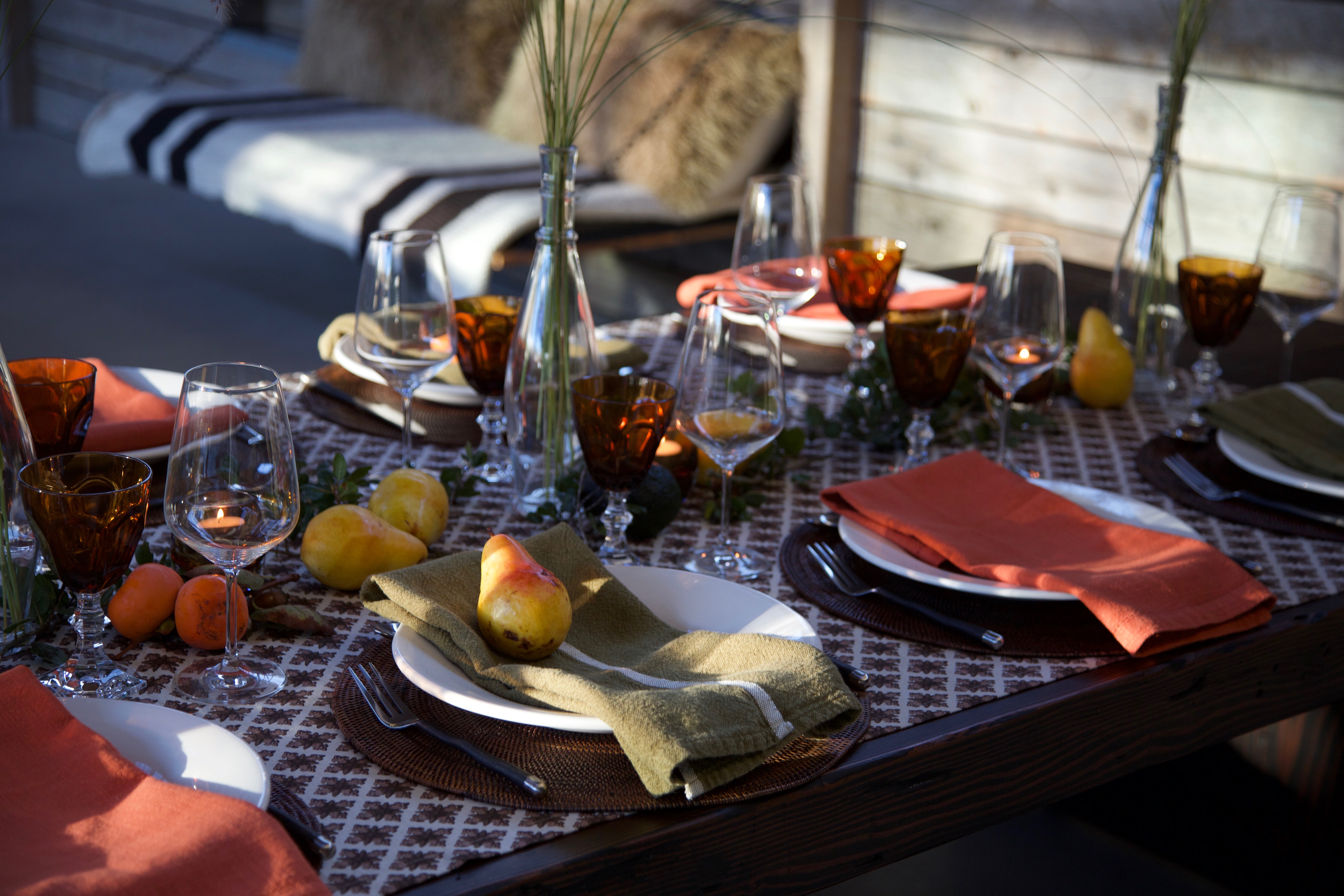 So if you’d like to save any of these ideas for 2019, please be my guest. Mi casa su casa.  Or should I say My barn is your barn 😉 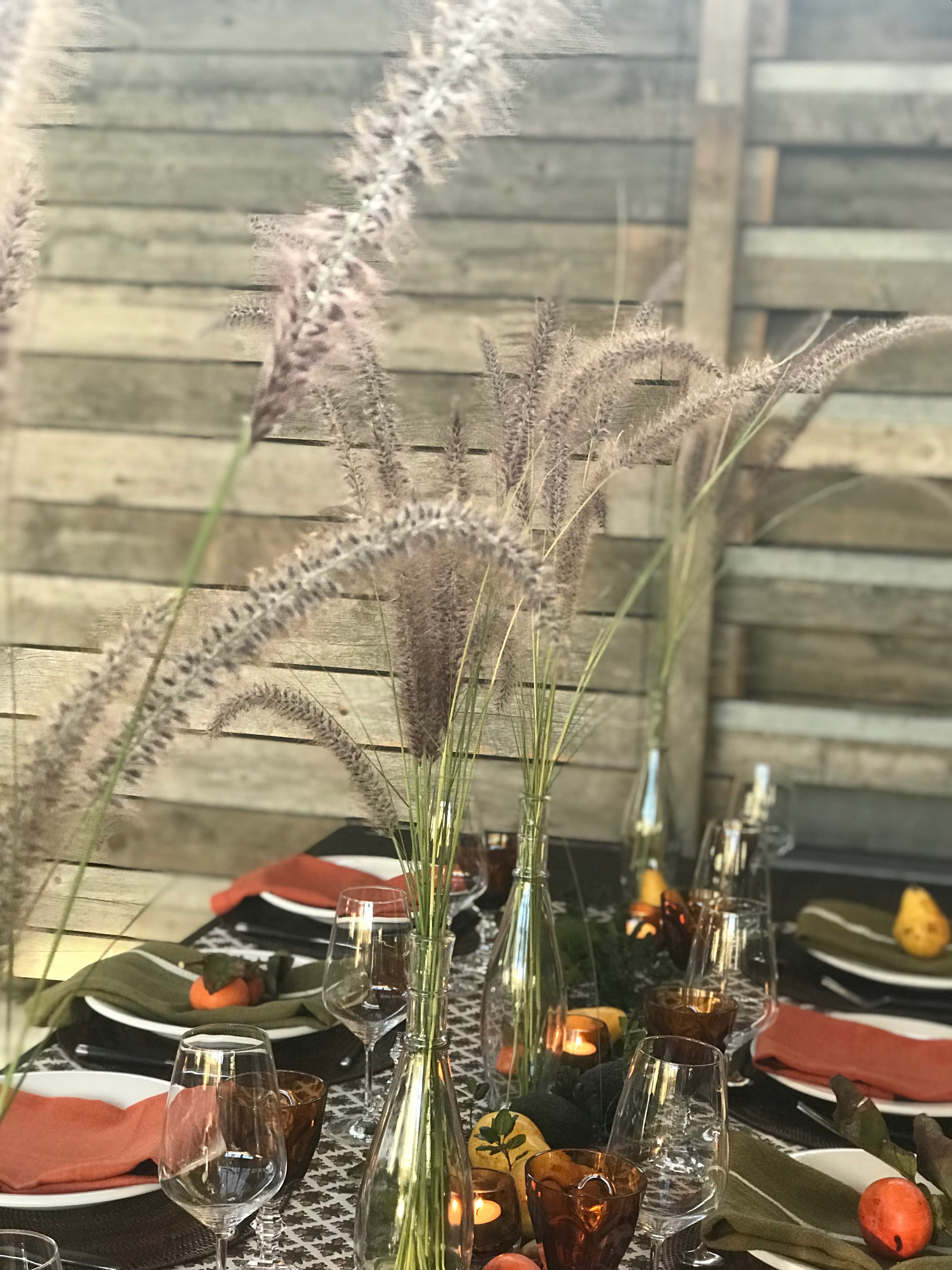 My table theme was  “Found Garden Bounty” with tall grasses, little oak branches and persimmons from the garden. Some store bought pears for just a little punch of added colour. The napkins & wicker chargers are from Hudson Grace and the fabric panel on the table by Raoul Textiles .

And shall I tell you a little secret? The Mario Luca Giusti amber glasses from Neiman Marcus are actually acrylic because what you are not seeing in these photos is the ping pong table not too far away! 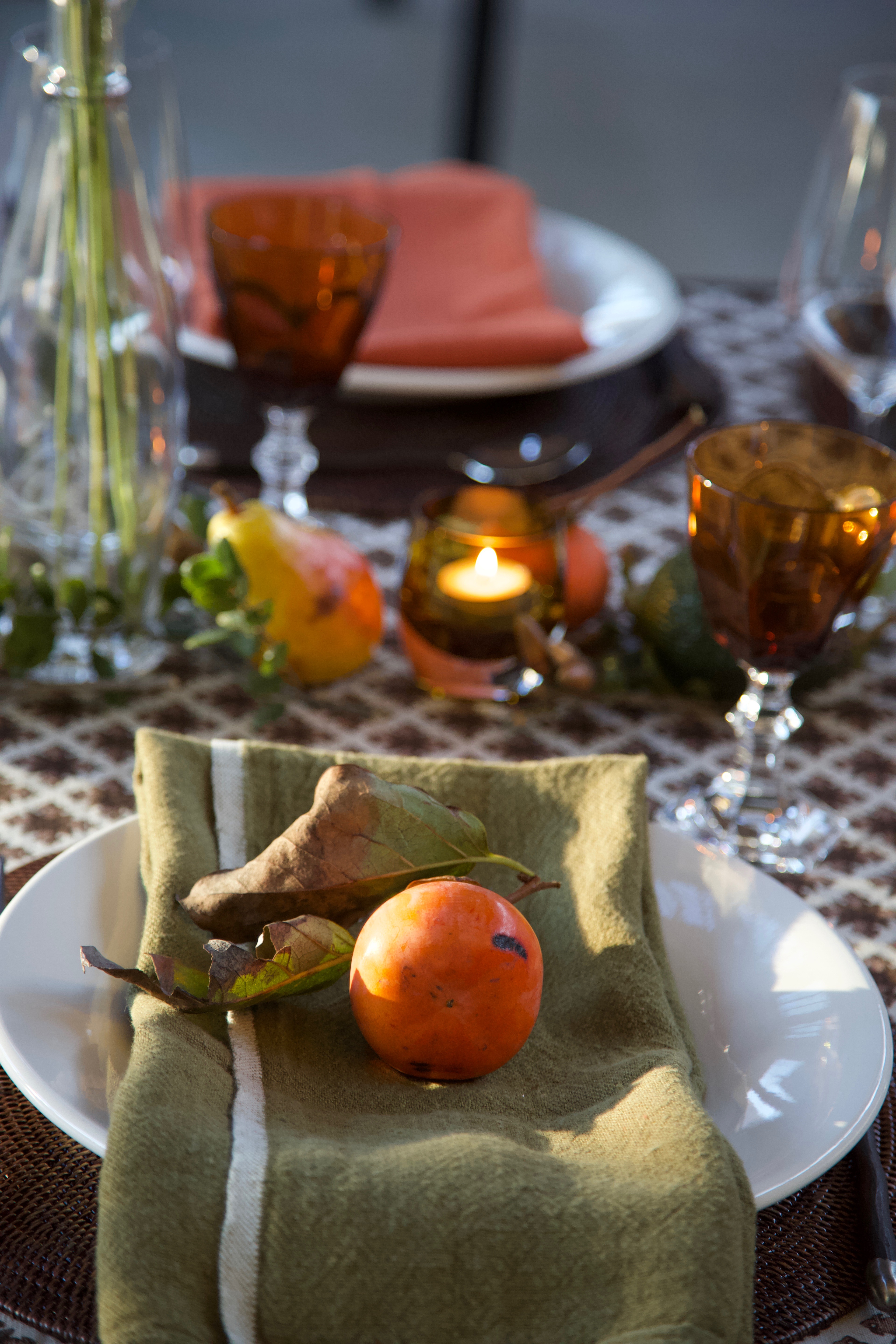 I cooked a Heritage turkey for the first time and despite temperature probe problems, it was cooked perfectly.  I was a tad nervous as we didn’t brine this year (hello, this is what happens when your kids get married and you have to share them with their other families. You lose your briner!) nor was it quite as immaculately ‘manicured’ as I’m used to.  In fact, to be slightly indelicate, emergency eyebrow tweezers were required stove side before this bird was ready to pop into the oven. Oye. Let’s just say I could never be a farmer or a butcher. Holy Moly. And my sister?? Even more squeamish (and they were her tweezers-ha ha!) That being said, despite the price ($10 a pound) and additional last minute grooming, I was super impressed with the Heritage.  It had SO much more brown meat and rich flavour than commercially raised turkeys, which I appreciated as I don’t eat white meat at all. Heritage turkeys are also allowed to live much longer lives and are raised in a far more ethical, natural conditions than commercial turkeys, which is why they are so expensive. If you are interested, you can learn more about them here

Because the Heritage turkey was smaller and different looking (quite frankly not as fat) than what I’m used to, I grew concerned  it wasn’t going to be enough, so I also threw in a ham slathered in peaches.

All the other regular suspects rounded out the line up; mashed potatoes (thank you Costco) with lashings of butter and home made gravy with turkey stock from Cookbook in LA ( also where I ordered the Heritage turkey), sweet potatoes with marshmallows & pecans, delicious despite some  pecans turning black as coal. 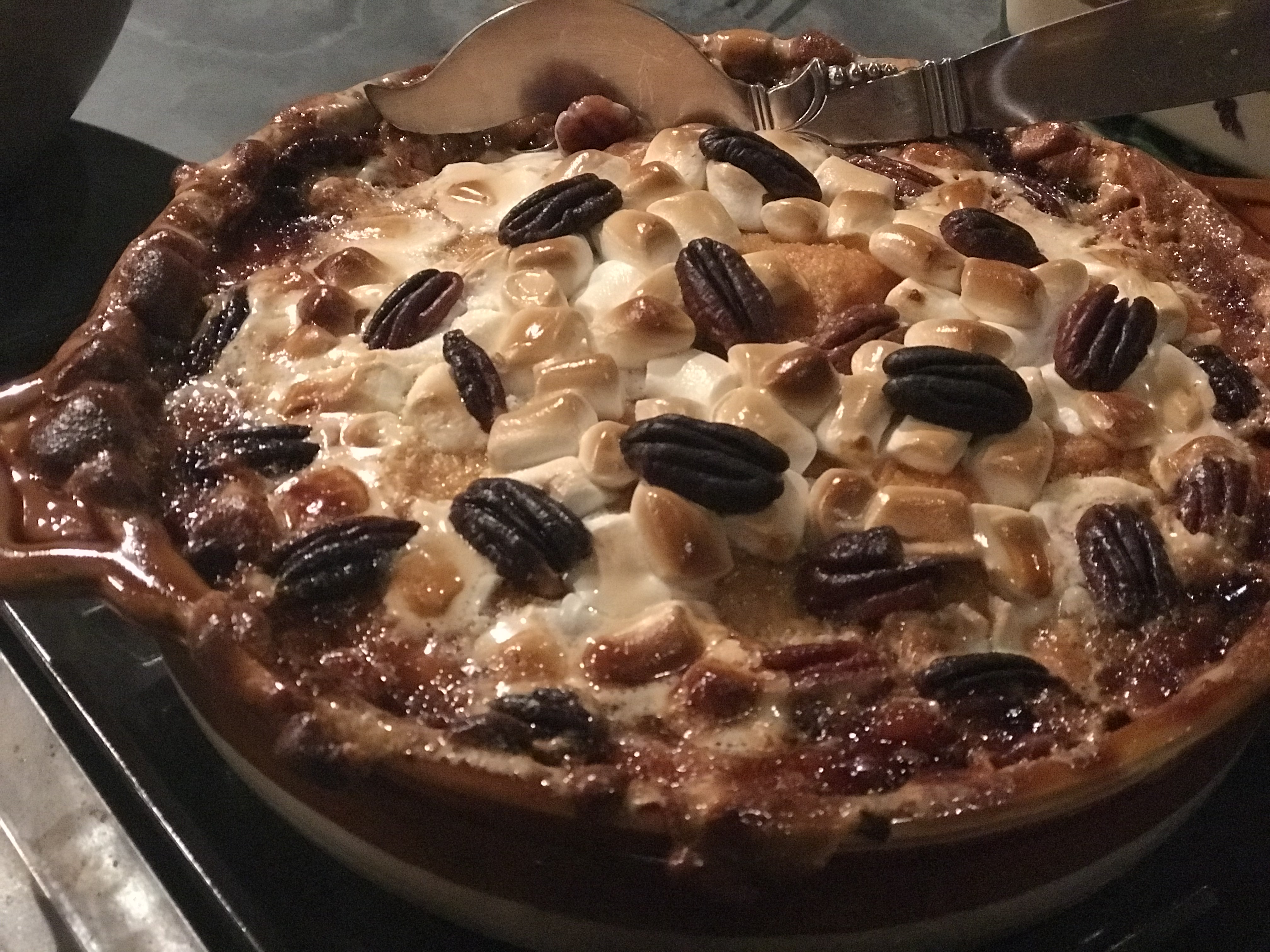 I made the green beans with portobello mushroom soup rather than the traditional Campbells soup, mixed added fresh english peas and it was yum, covered in a thick crust of deep-fried onion rings (store bought but burnt enough to look homemade-which is the secret really. Well, that and hiding any store glass or plastic containers in the garbage can that guests might uncover in the kitchen whilst helping to clean up (graduates of Kitchen Garbage Spy School)

This year I also strayed from my old Martha Stewart dressing recipe and again, inspired by our garden, particularly the sage leaves and some beautiful chanterelle mushrooms and brioche bread I found at the market, decided to just wing the stuffing with no recipe.

I let the loaf of brioche go a little stale, cubed it large, worried it wasn’t enough, added even firmer cubes from leftover sandwich buns. Then sautéd a bunch of chopped onions, celery and several sliced garlic cloves in about 1/4 pound of butter with lots of freshly ground pepper & Maldon’s salt.  When ready I added the turkey stock and let this simmer while in another metal pan I sautéed the coarsely sliced mushrooms with a large knob of butter and salt.  Once the mushrooms were ready and the juices reduced, I divided the bread cubes in two large bowls and mixed in the sautéed mushrooms, onions and celery  equally over both. To this I added a heap of dried apricots, dried cranberries, and generous amount of chopped fresh sage and parsley. Salt & fresh pepper to taste.  Drizzled the last of the juices from the saucepans into the mix and stuffed 1/2 the dressing into the turkey and the rest into a casserole covered with foil for the oven. 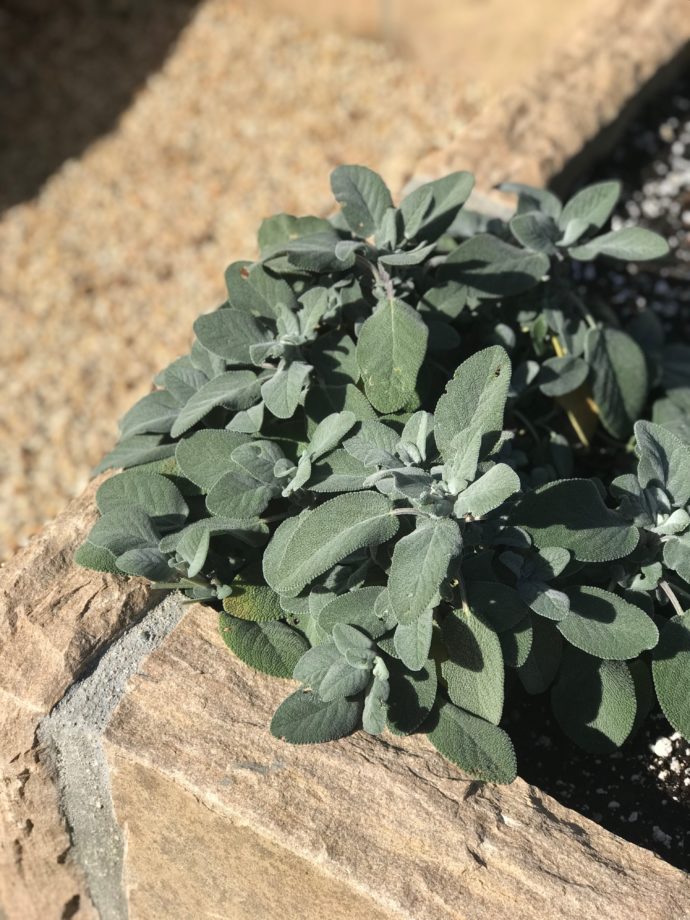 Sage growing in the vegetable garden 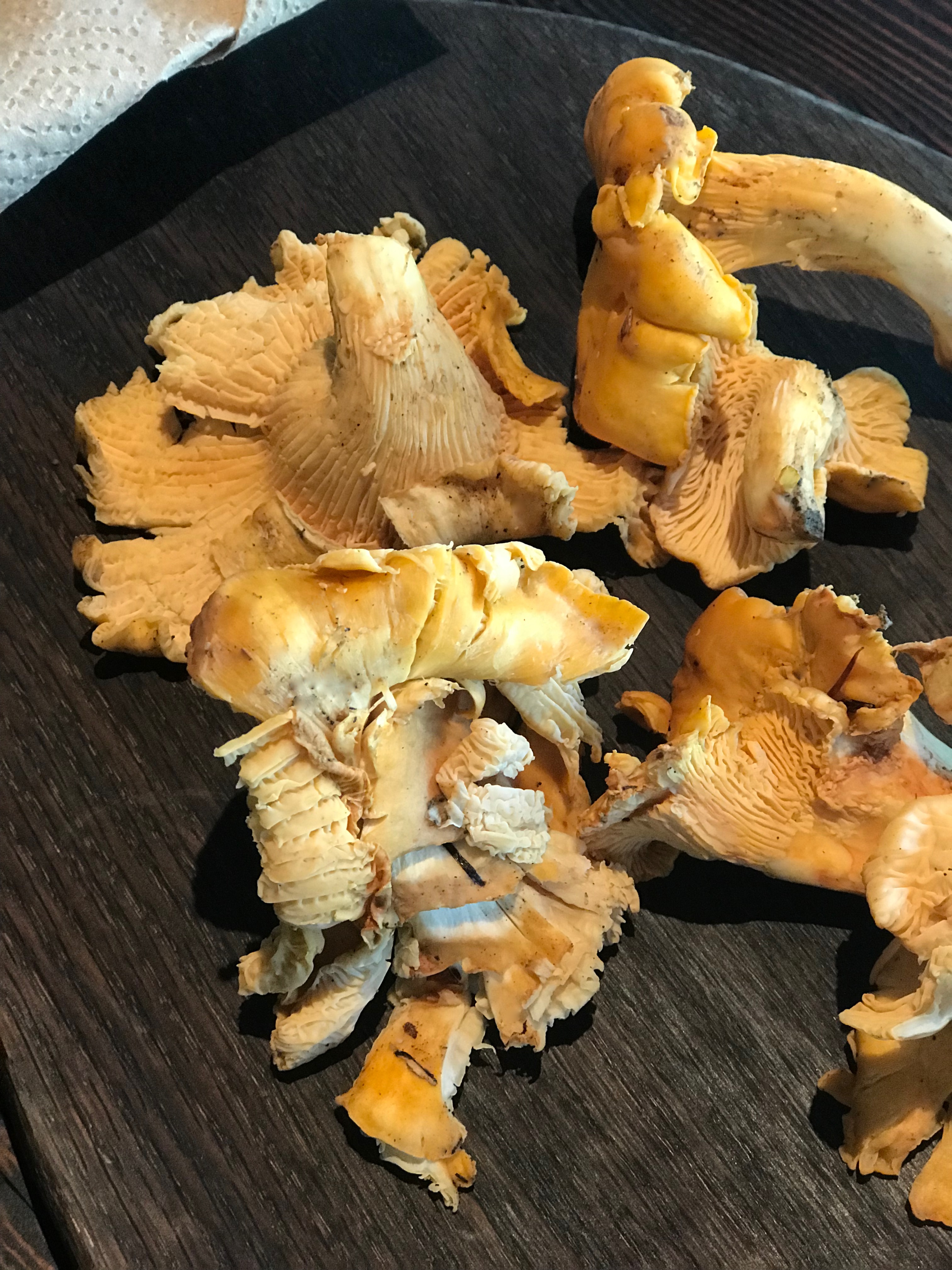 I was inspired by this lovely photo from the Faviken Cookbook so I had freshly picked pomegranate seeds to sprinkle over the mushroom stuffing at the very end but… I forgot. Would have been pretty though.  I don’t think there’s ever a dinner where I don’t forget something. I need to stop putting dishes outside for one thing. That might help. 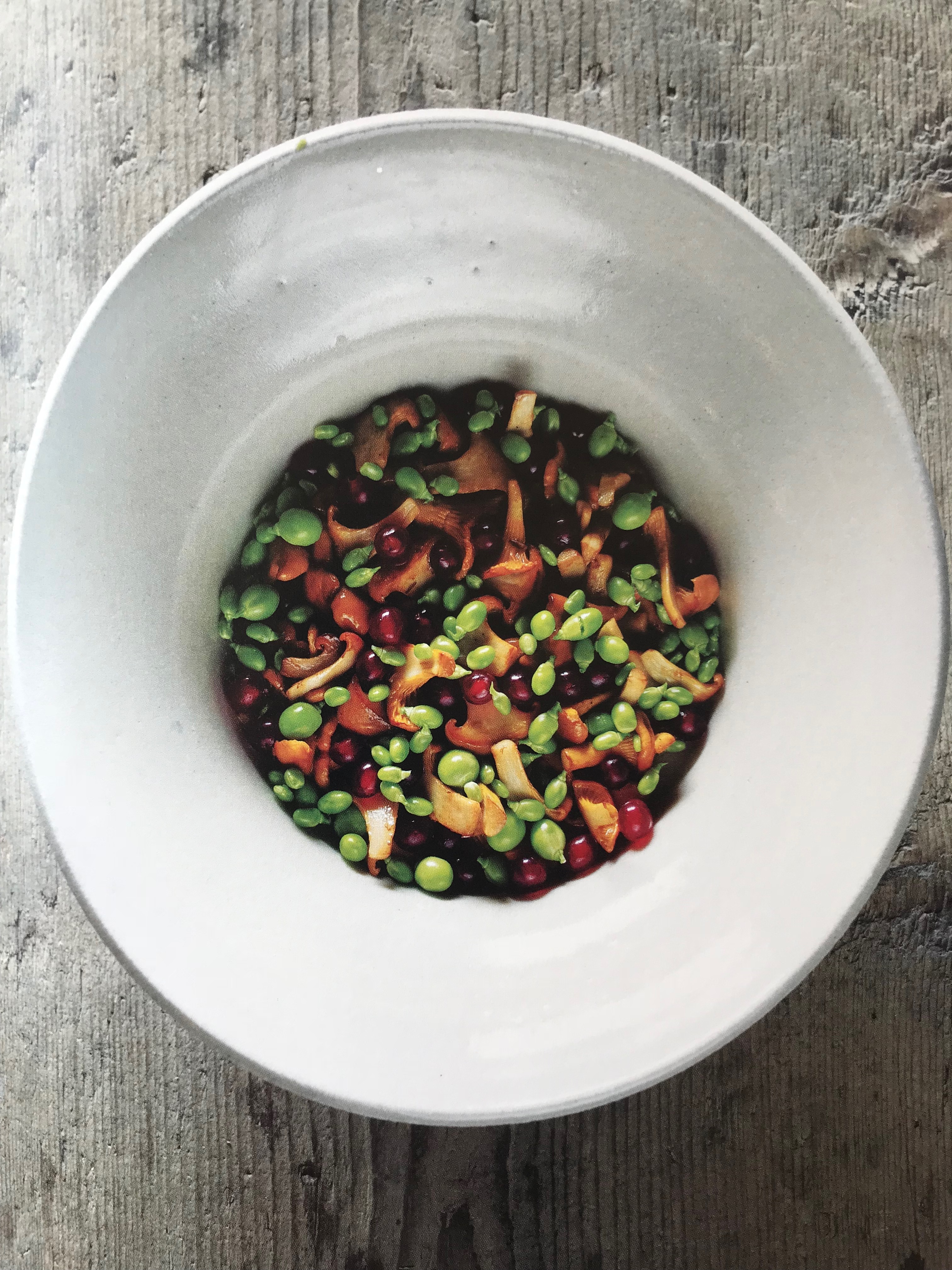 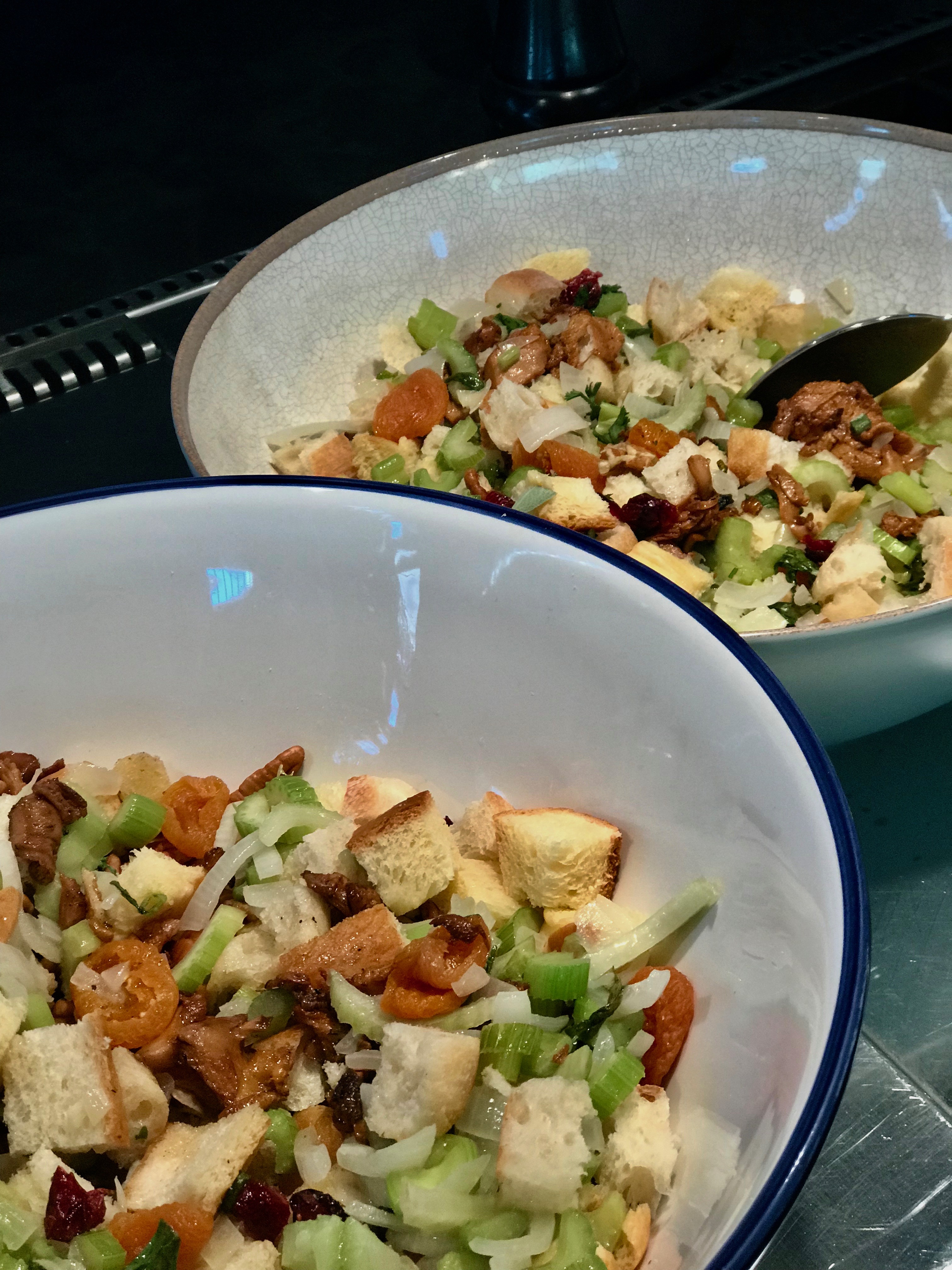 The dressing before cooking and stock and butter drizzled in 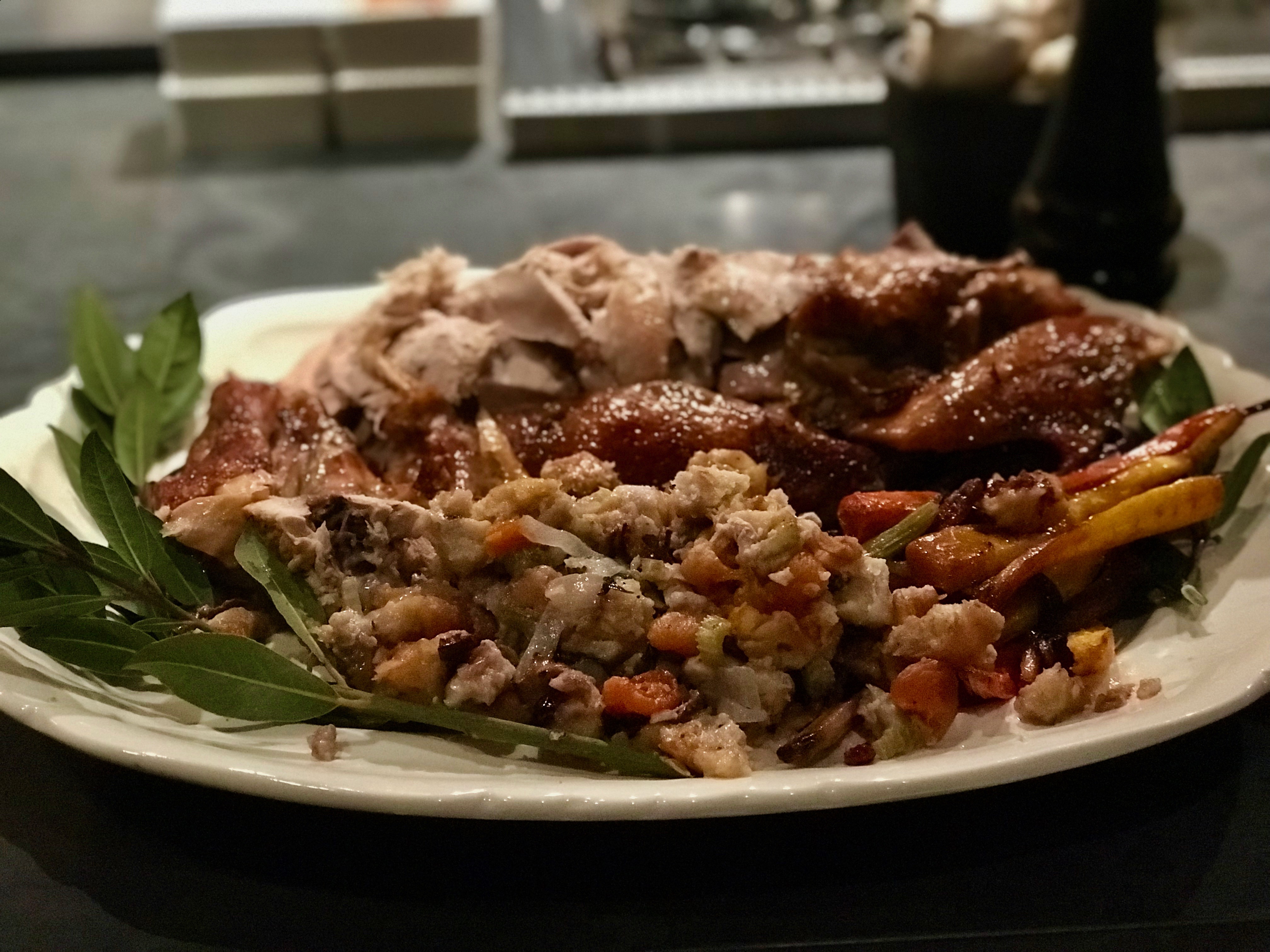 Not the best pic but I was busy!! 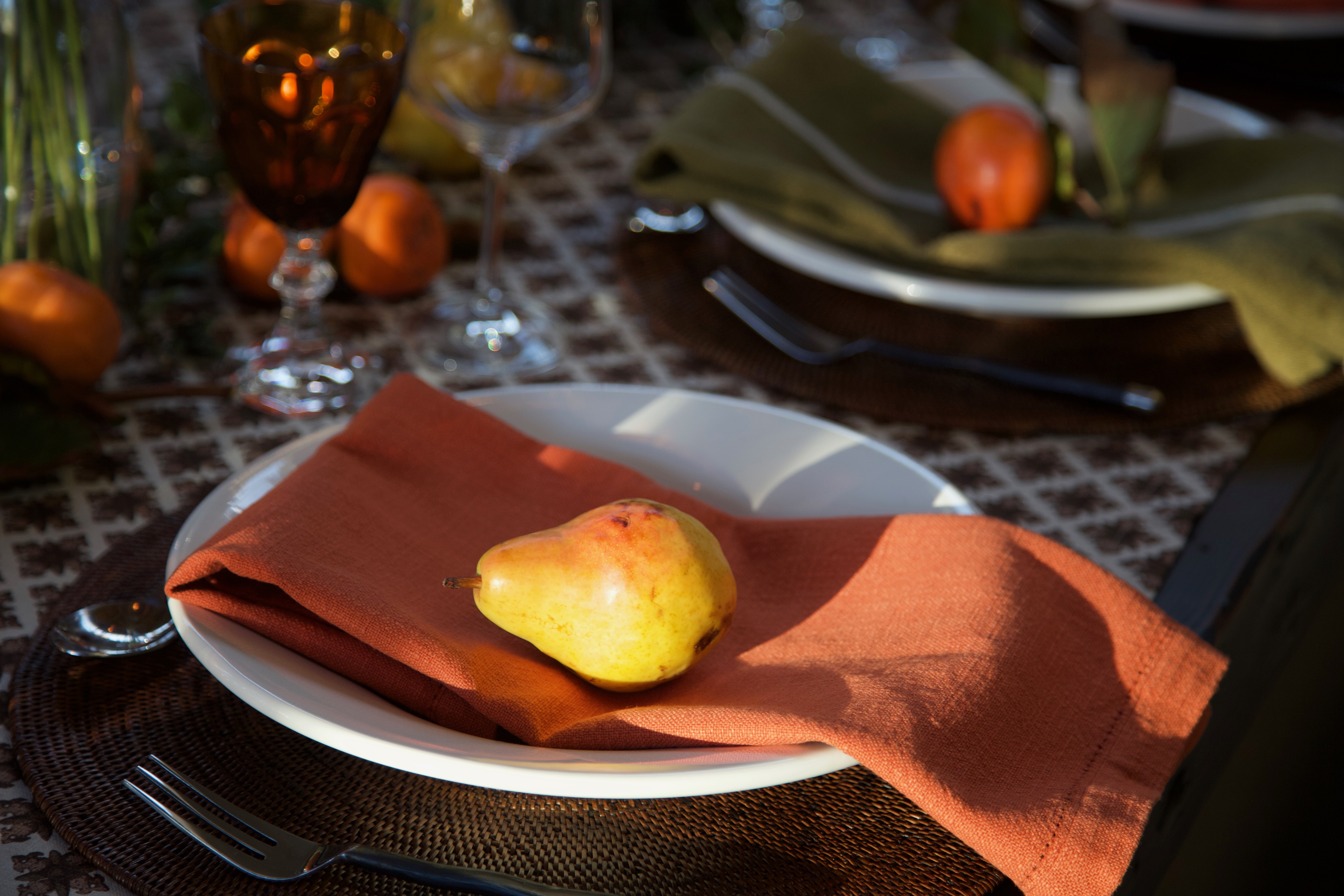 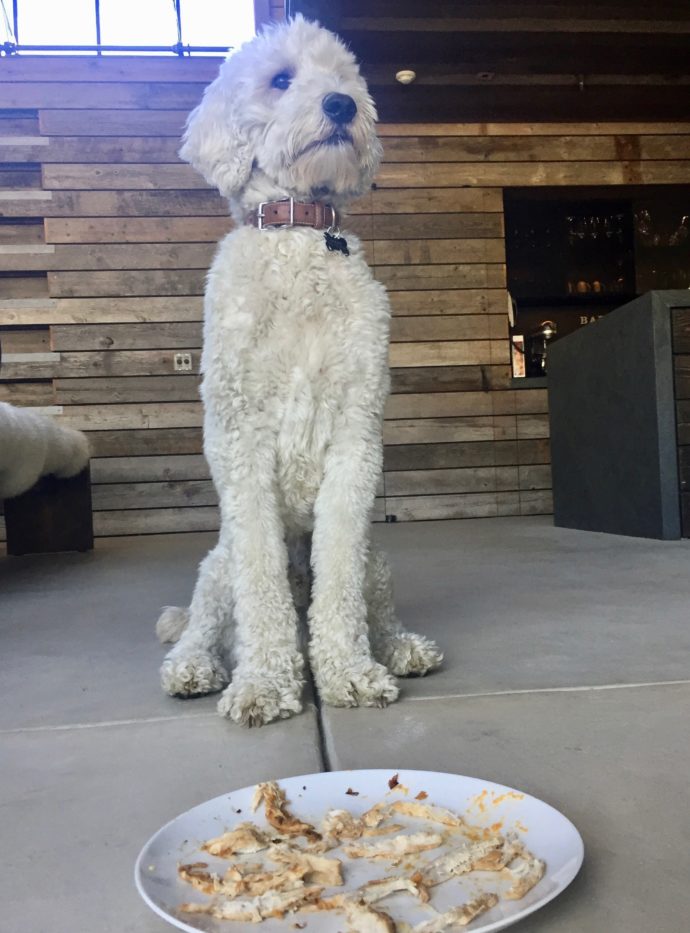 Benny (my son & his partner’s dog) oh so patiently waiting for the OK to eat his left overs!!  <3 What a sweetheart he is!

I hope that all my American friends had a lovely Thanksgiving. We’ve had a rough time of it this year in California, but of course we realize this is true for many, many other parts of the country and world as well. We Californians are so touched and grateful for all the love and concern we’ve received from all over the globe. We enjoyed some well needed rain last week and we’re hoping for more this week.

Look for beauty in the littlest of things, be they gifts from Mother Nature or Human Nature.

Stay safe and grateful for all Life’s blessings.

PS. As always, I have no guest post, recompense or advertising  agreements with any of the companies linked to above.