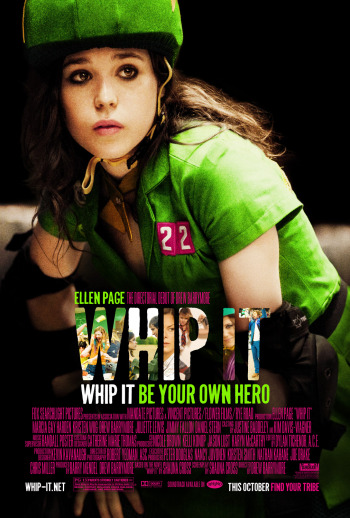 Went to see Whip It today.  The theatre was totally full.  We had to sit in the second to front row, which I haven’t done since I was hmmm… I dunno, about seven years old maybe?  Anyway, other than the crick I now have in my neck, I loved the movie.  Total chick flick, but really cute.  Marcia Gay Harden and Daniel Stern are wonderful as the parents, Ellen Page is as charmingly adorable as she was in Juno and I really liked that Wilson brother as the coach. (where did he come from??)  Drew Barrymore takes a small part just to stay connected to the party I guess but she made some great casting choices.  Landon Pigg was a cool pick for the love-interest. It’s rather fascinating how we get so used to expecting perfection (teeth, hair, bodies, etc.) in American movie stars that I found his irregular teeth and awkwardness very refreshing and interesting. I even liked that his acting wasn’t that great- it added a touch of vulnerability that was appealing.   Click here for Landon Pigg song

PS.  Is it just ME, or does Landon Pigg not look like Ashton Kutcher’s and Julia Robert’s love child???

Whip It-Watch It ( the trailer)