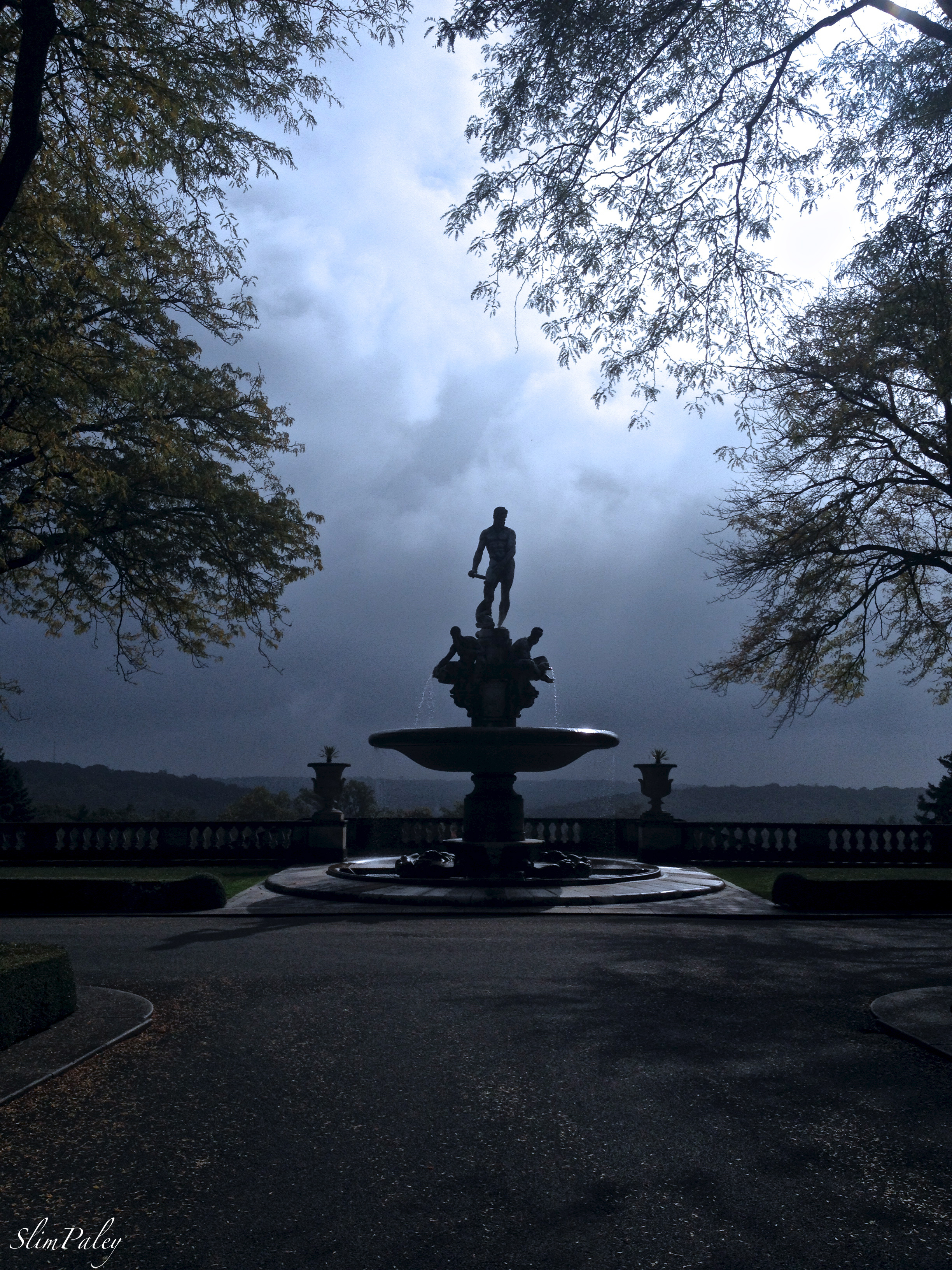 Our timing was perfect.

In search of turning leaves (the spectacle is late this year in NYC) my older son and I decided to drive out and visit the Hudson Valley last weekend. (I’ve been in NY, just in case you were worried about me!)

With my boy having only one week day available, we managed to purchase tickets to tour famous Kykuit in Sleepy Hollow on Thursday morning.

Rain was forecast but said progeny was optimistically pessimistic about the weatherman’s ability to predict that far ahead. 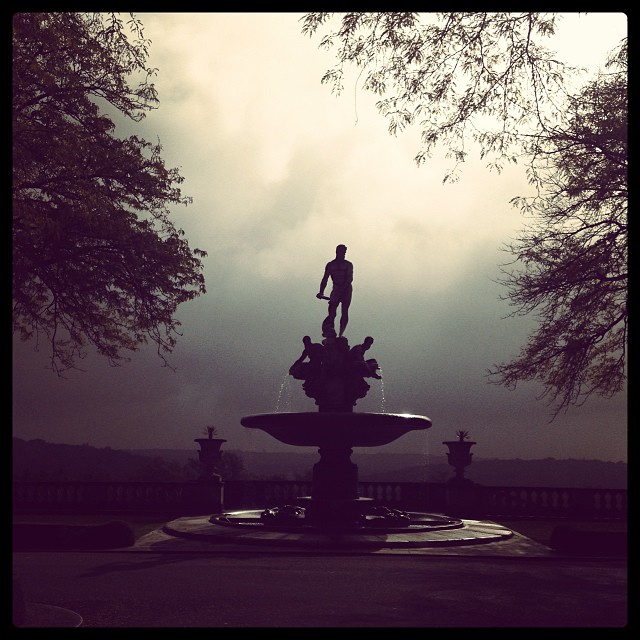 This was my Instagram photo of the moment we arrived, but in the space of a few minutes the mist lifted, the clouds dispersed and it turned out to be a stellar day.

So basically, my son is a genius. 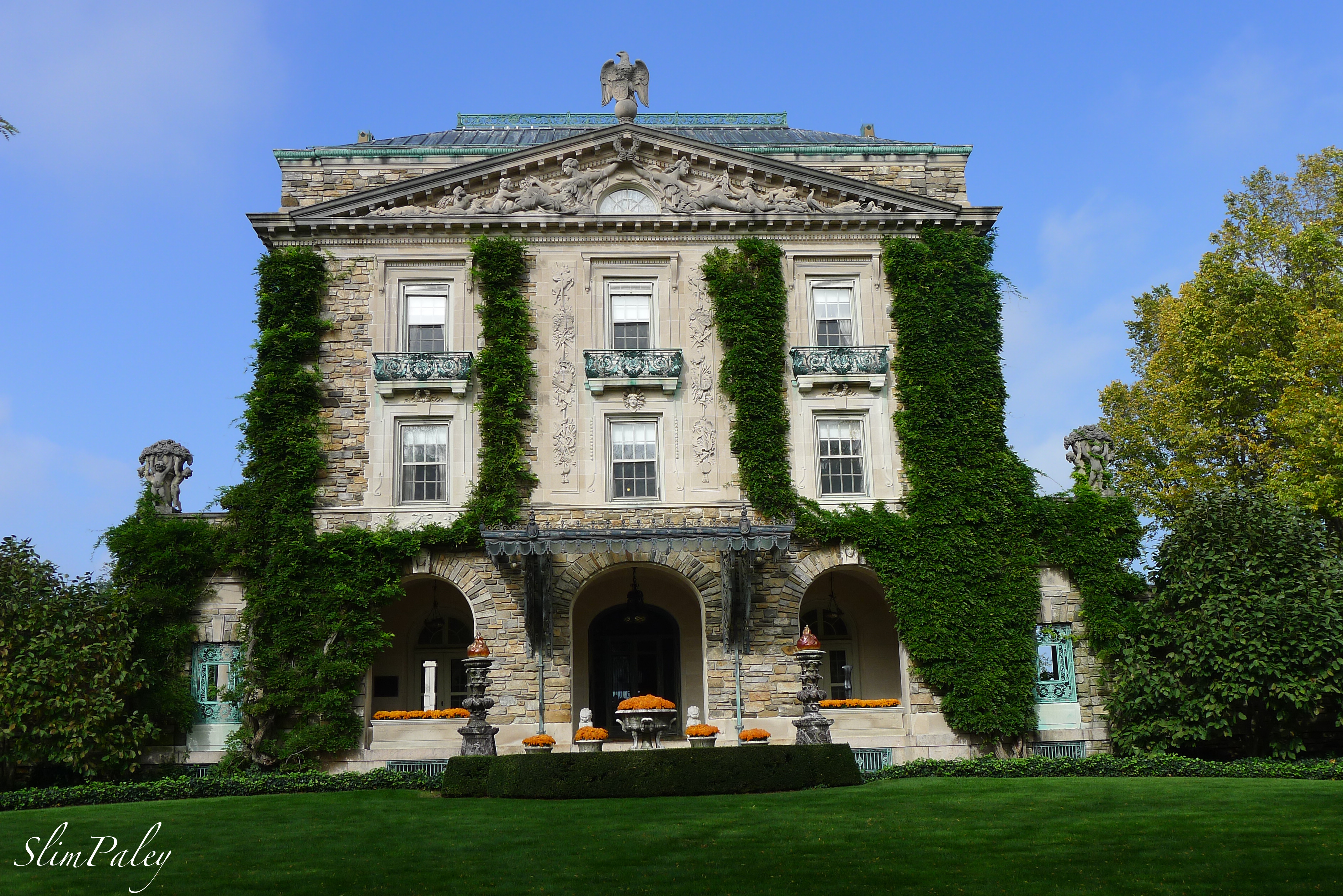 Kykuit (Dutch for “Lookout”) is a stately stone home sitting high upon a picturesque knoll above the town of Sleepy Hollow.  After getting off to a very rough start, the house was finally completed in 1913.

Teaser; imagine taking almost 6 years and how much money(?) to build your dream home, finally moving in and having to move right back out due to so many design flaws. As I say, it’s always something…but that’s another story.

Kykuit was home to four generations of the Rockefeller family until Nelson R. bequeathed  his 1/3 share to The National Trust  for Historic Preservation upon his death in 1979.  The guide didn’t elaborate on who held the other shares. 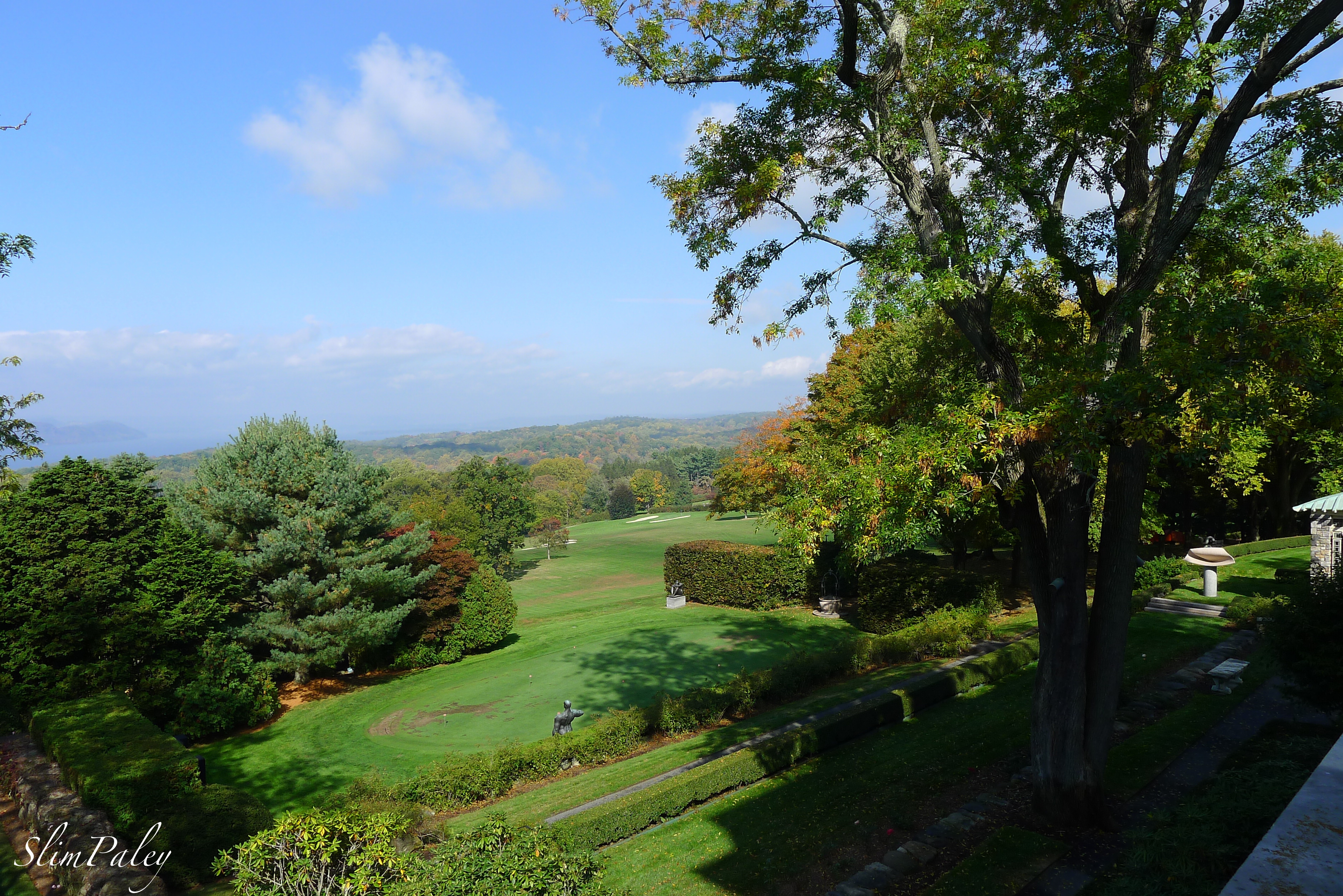 It was 1893, when John D. Rockefeller, encouraged by his brother William’s glowing reports of the Pocantico Hills, first bought the property. The family gradually acquired the surrounding land until they’d amassed almost 4,000 acres.

That’s on the Hudson people.

Did I mention money wasn’t an issue??

Luckily for the public, the main house, gardens and carriage barn all opened for tours when the house transferred to the historic trust. The family still retains the rest of the property, keeping the huge “Children’s Playhouse” and other buildings dotted about the grounds for personal use. Happy Rockefeller, Nelson’s widow now in her 80’s, lives nearby. 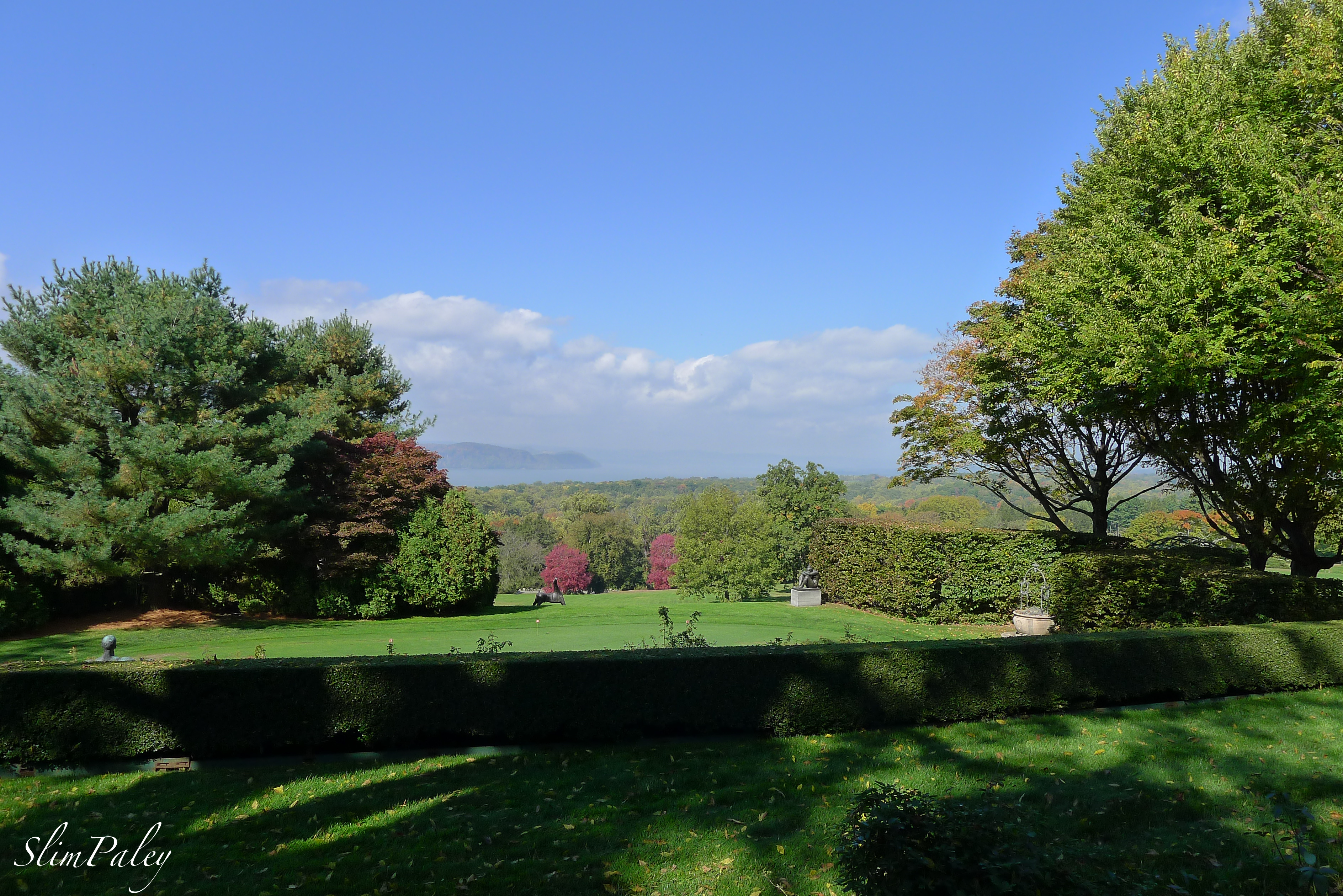 Impressive, if not too surprising, the original landscaping plan was designed by Frederick Law Olmsted (of Central Park fame) More surprising was that John D. was less than thrilled with Olmsted’s efforts and in addition to taking much of the garden design upon himself, commissioned William Welles Bosworth to finish the grounds more to his taste.

The truth is that I could go on endlessly about the history behind all these great estates; Kykuit, Oak Alley, Vizcaya, The Breakers et al.  Fascinating reading if you’ve the time and inclination, but what I truly love about taking historic tours are the behind-the-parlour-door rhythms, quirky little tid-bits and not so occasional scandals you take away from the homes and their ghostly inhabitants. Hence the popularity of “Downton Abbey”. 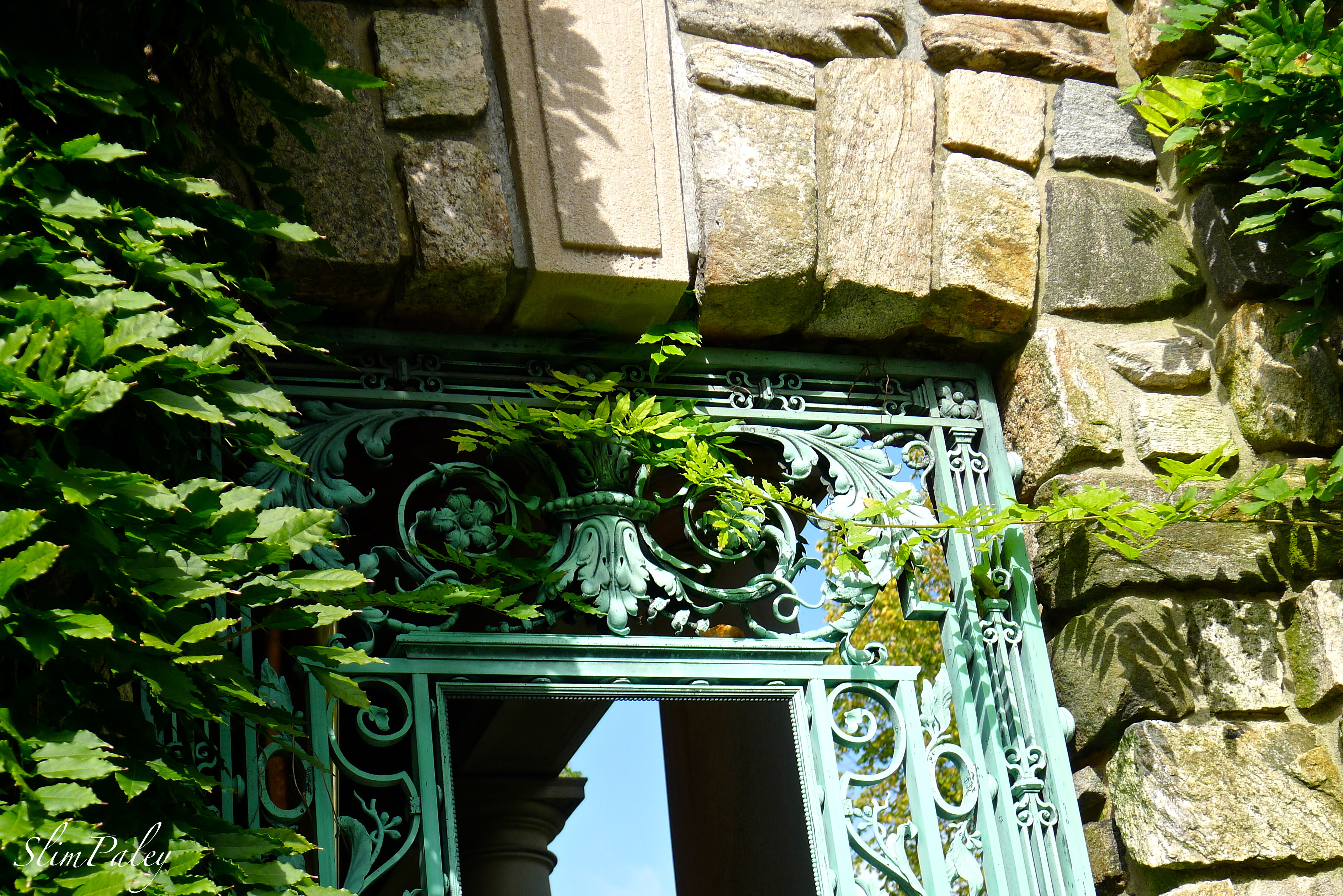 Having a really great tour guide is like getting your hair done by the best gossipy celebrity hair stylist. Buckle up and get ready to dish the dirt!

What was it really like to have been America’s very first billionaire?

Why was John D. Rockefeller so infamously ‘tight with a dime’?

( Legend has it John D. literally gave out rolls of nickels and dimes (an estimated 30-40,000  over his lifetime) plus a brief lecture on the rewards of working hard and saving money to poor people in the street in an attempt to dispel his less than ‘Generous’ reputation)

That being said, he and his heirs were exceptionally philanthropic, particularly when it came to the Arts, and Conservation. The amount of money, land, buildings and art bestowed upon the State of NY by the Rockefeller family could well be unmatched. 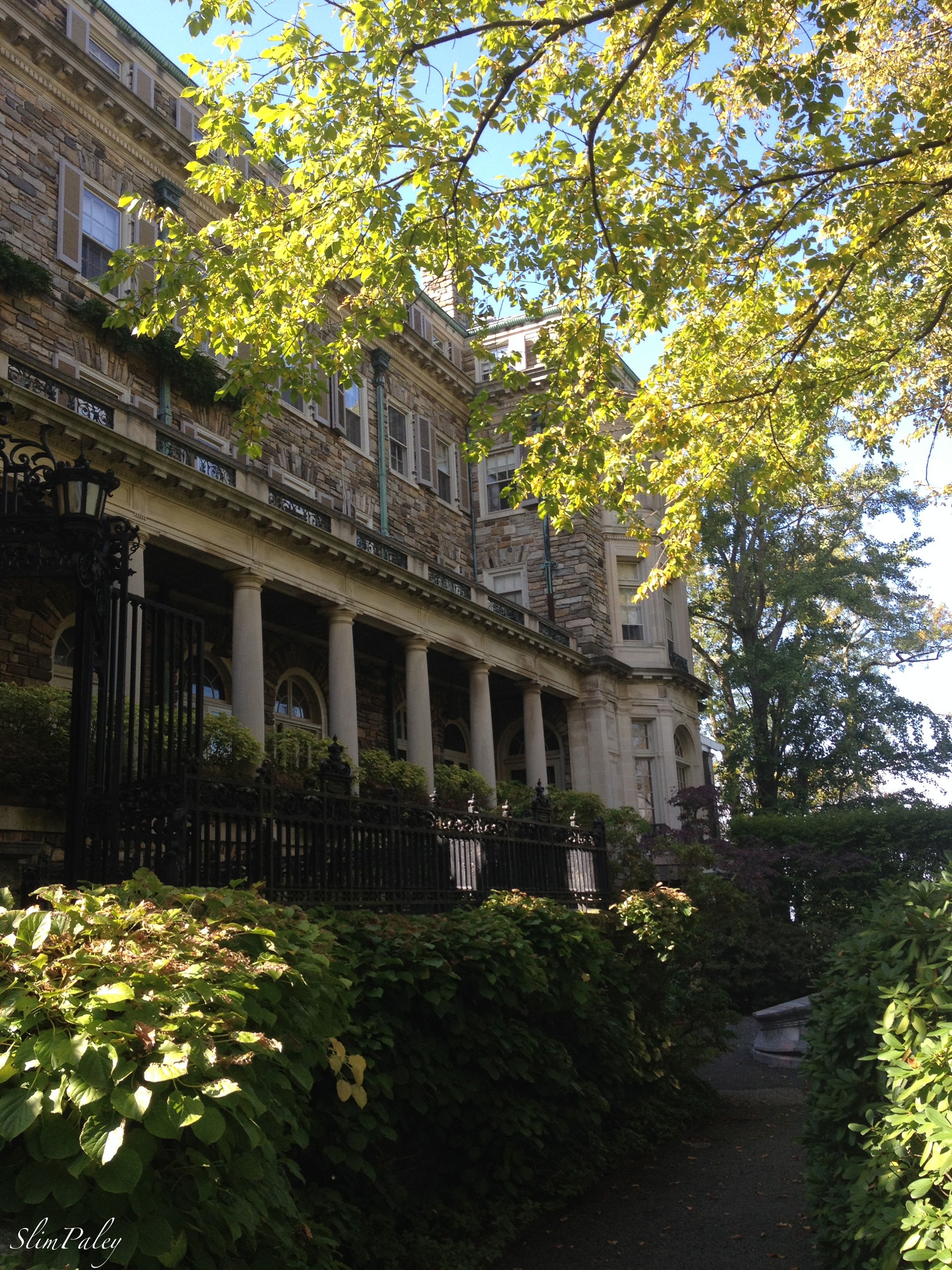 A side view of the house reveals that Kykuit is much larger than it appears from the front.

The Rockefellers were a much less ostentatious bunch than their neighbours the Vanderbilts.

Let’s just say I doubt the Kardashians would have made the guest list. 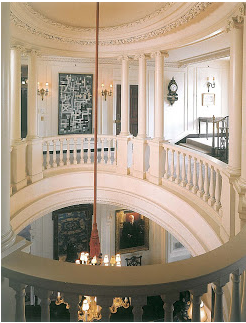 I found one small image of the interior of Kykuit, but unfortunately no photos are allowed to be taken in the house-and I bonded too much with the guide to sneak any iphone pics ( hate when that happens) 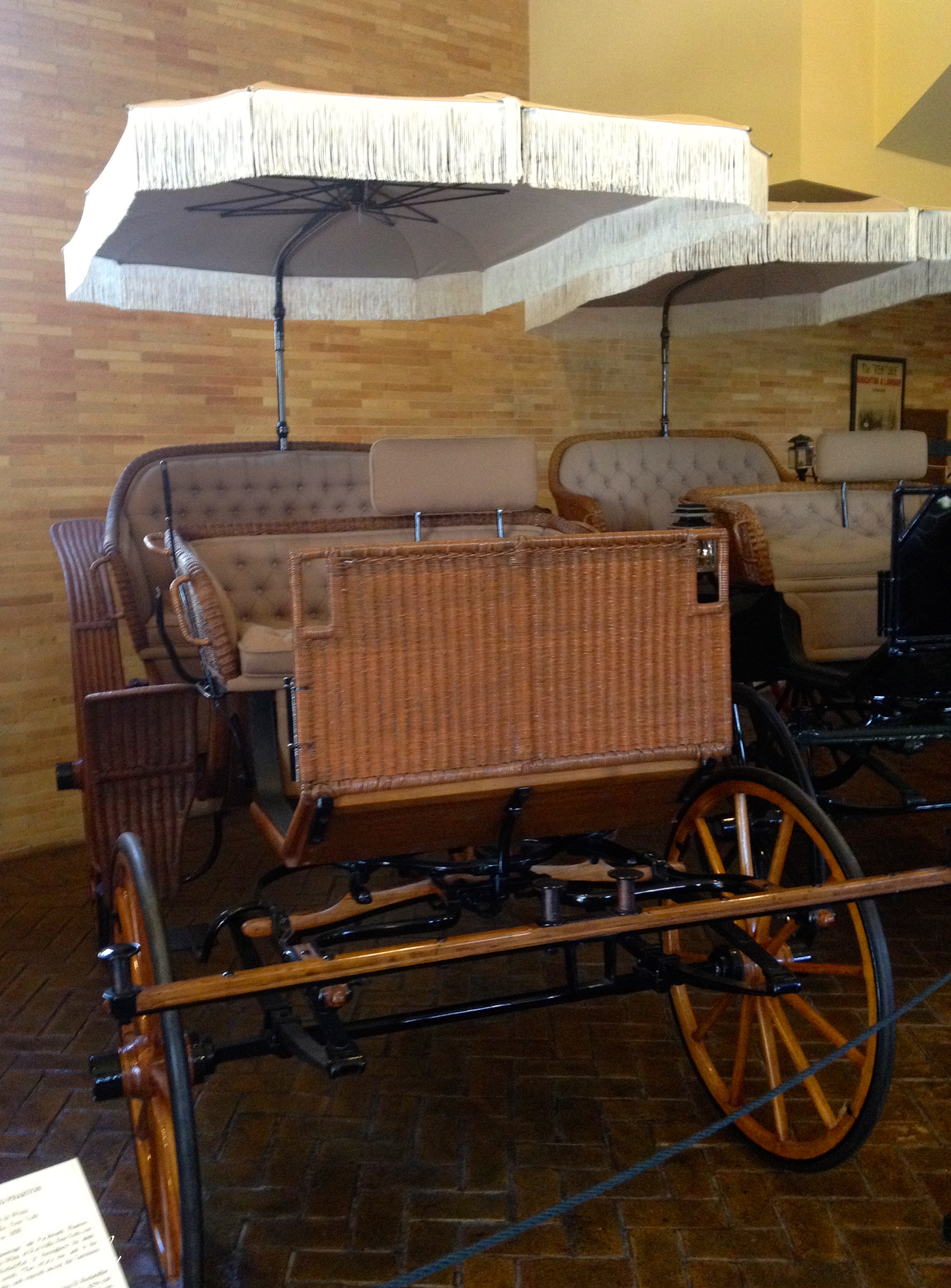 “Surrey with the Fringe On Top”

The  2 1/2 hour tour does include the massive old carriage house and stables where you are allowed to use your camera. 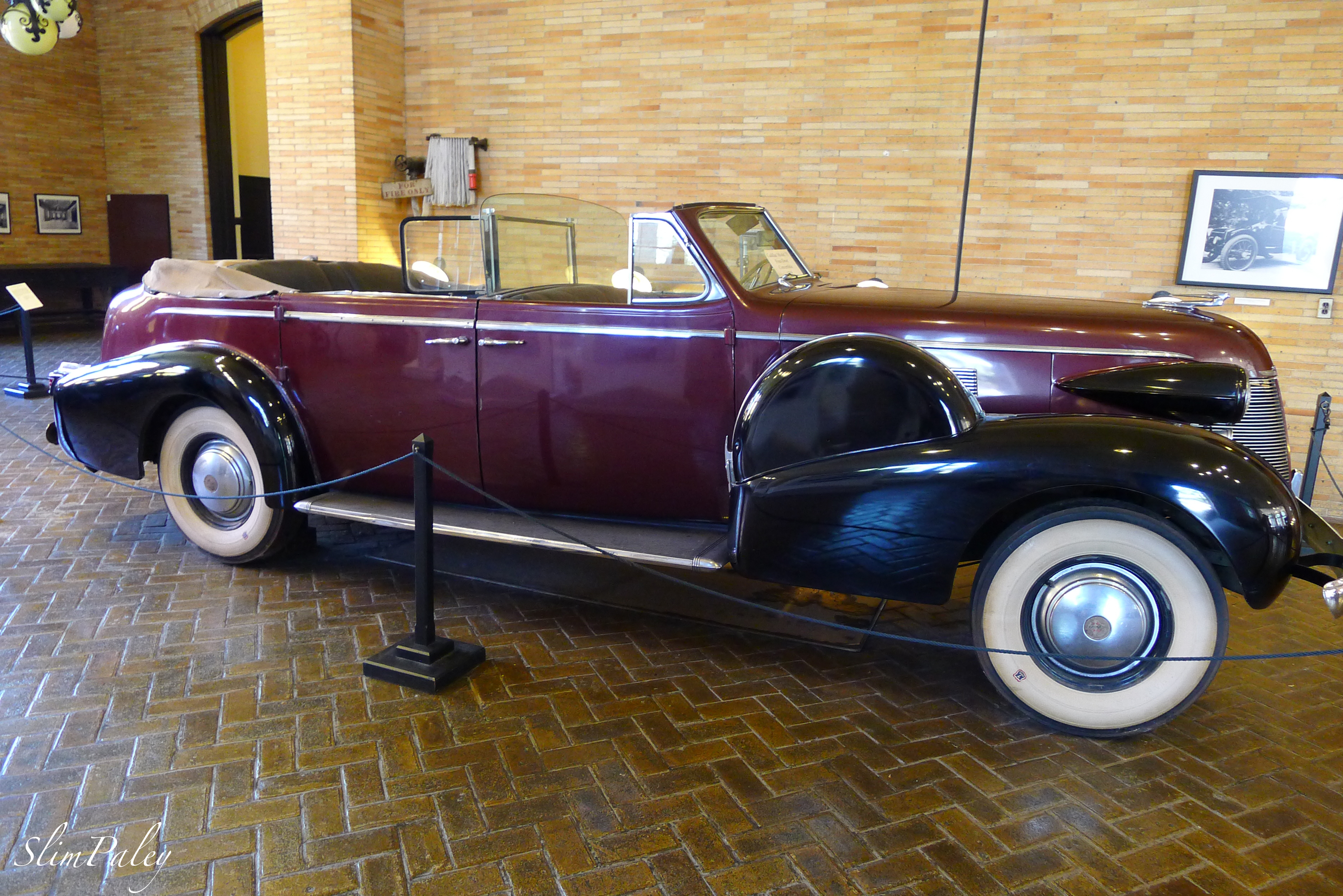 What was it like to drive around in 40 ft long  Cadillacs? Check the separate windscreen for the back seat! 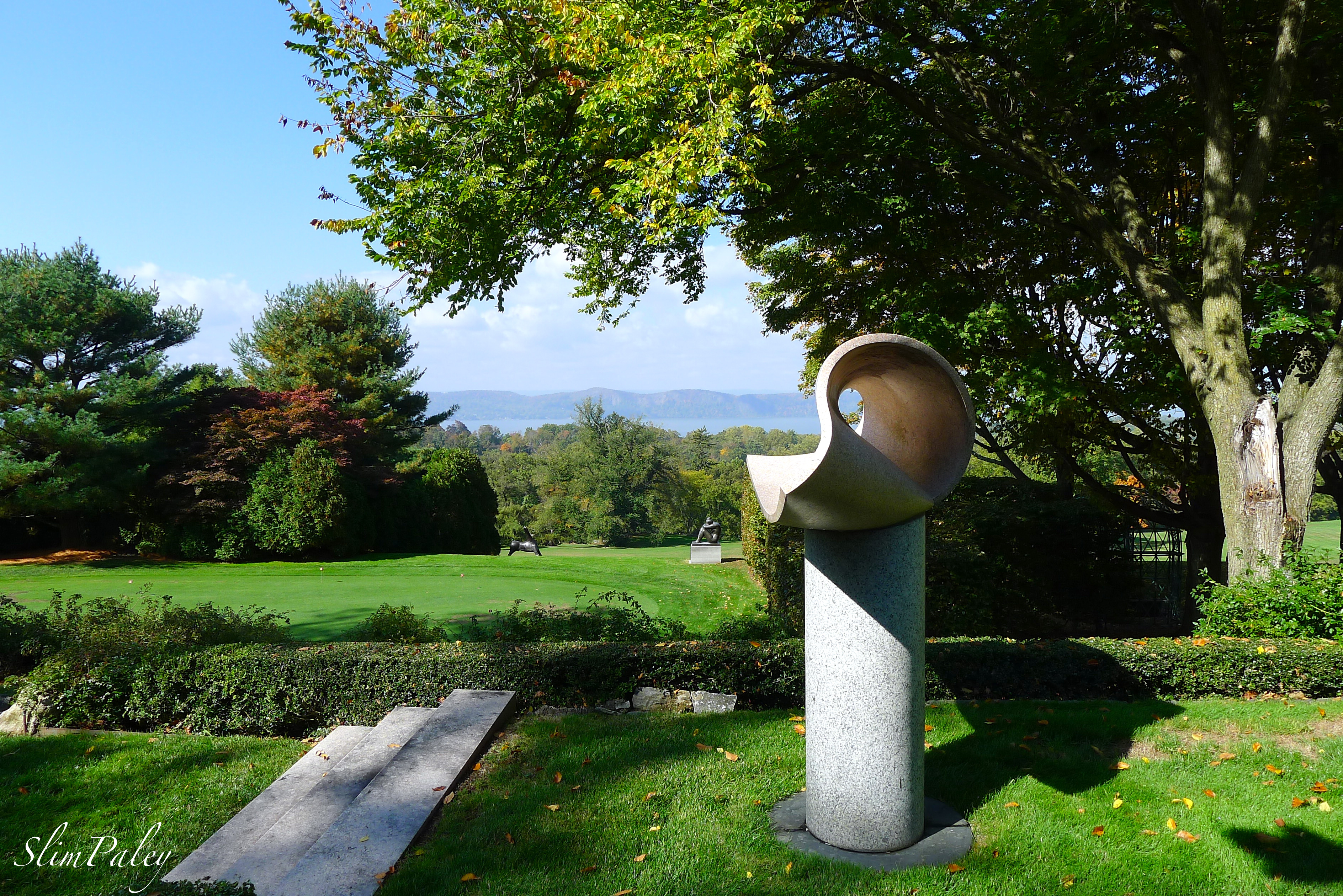 A tour of the lower levels of the house features a pretty major art collection including works by Picasso, Lautrec, Calder, Giacometti, and Chagall. I must admit this was my least favourite part of the tour. I was underwhelmed, not by the art but the space, which isn’t very appealing. I couldn’t wait to get out and back up into the natural light, the gardens and the views, which are spectacular. 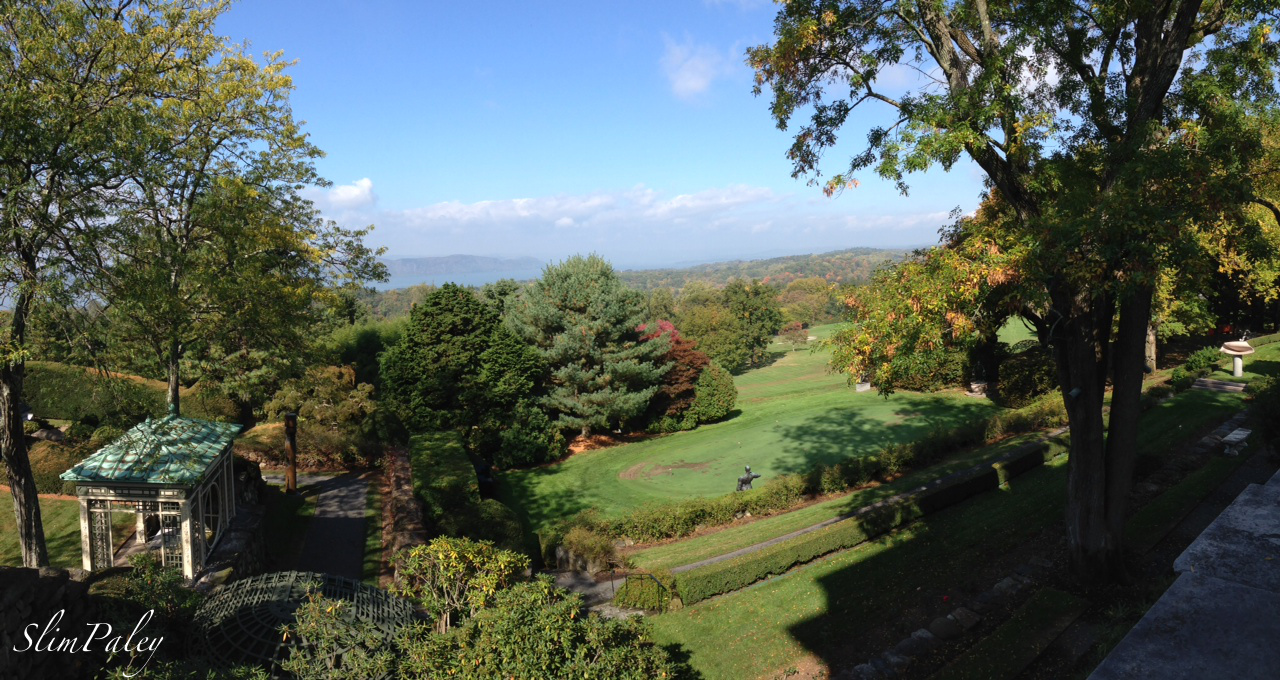 The 9 hole golf course within the the 250 acres of walled and gated property surrounding Kykuit is gradually being forsaken. It costs $100,000 per  year to maintain…per hole. 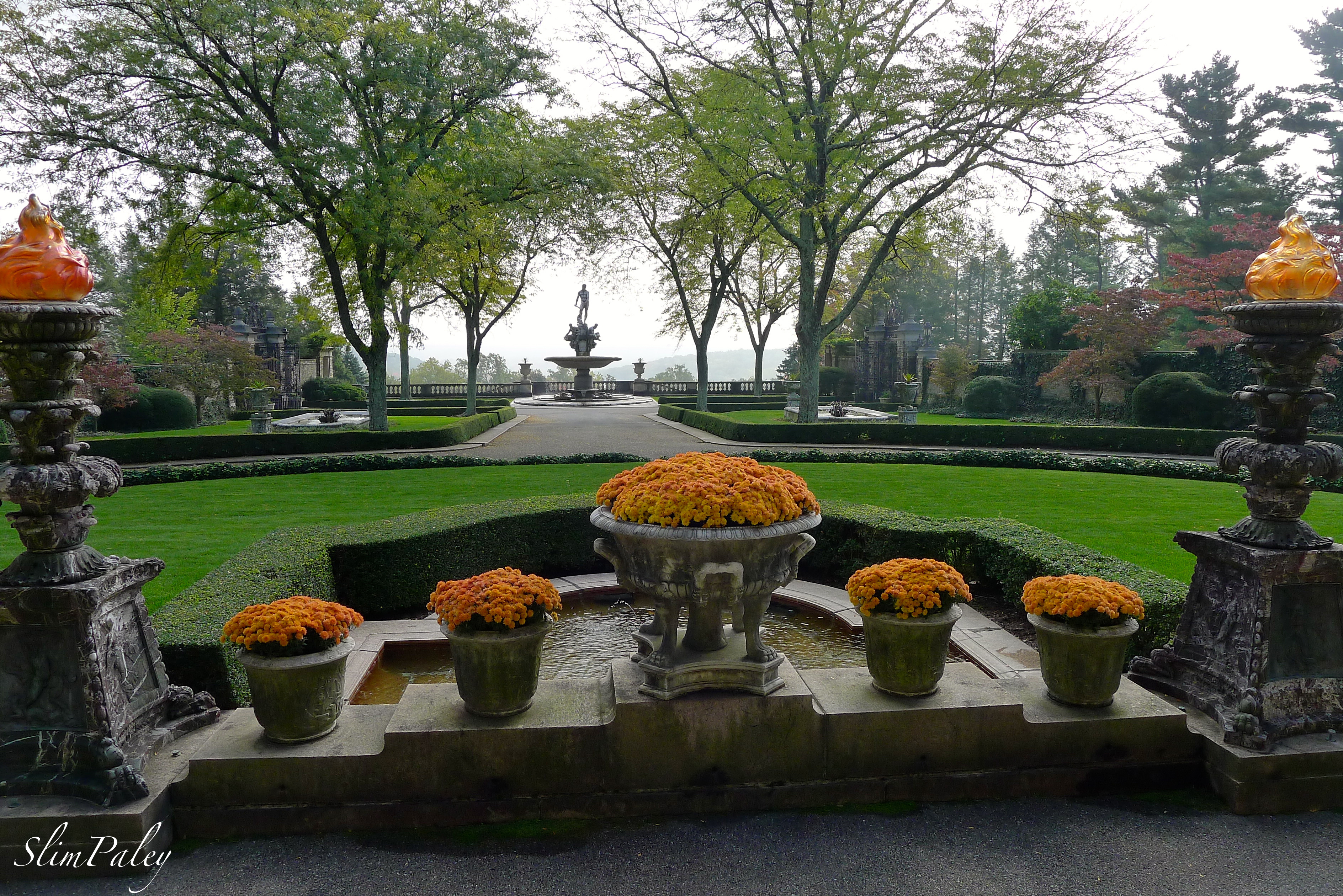 The view from the front entrance.

The ‘flames’ flanking the urns are electrified. All the mod cons for Johnny D. 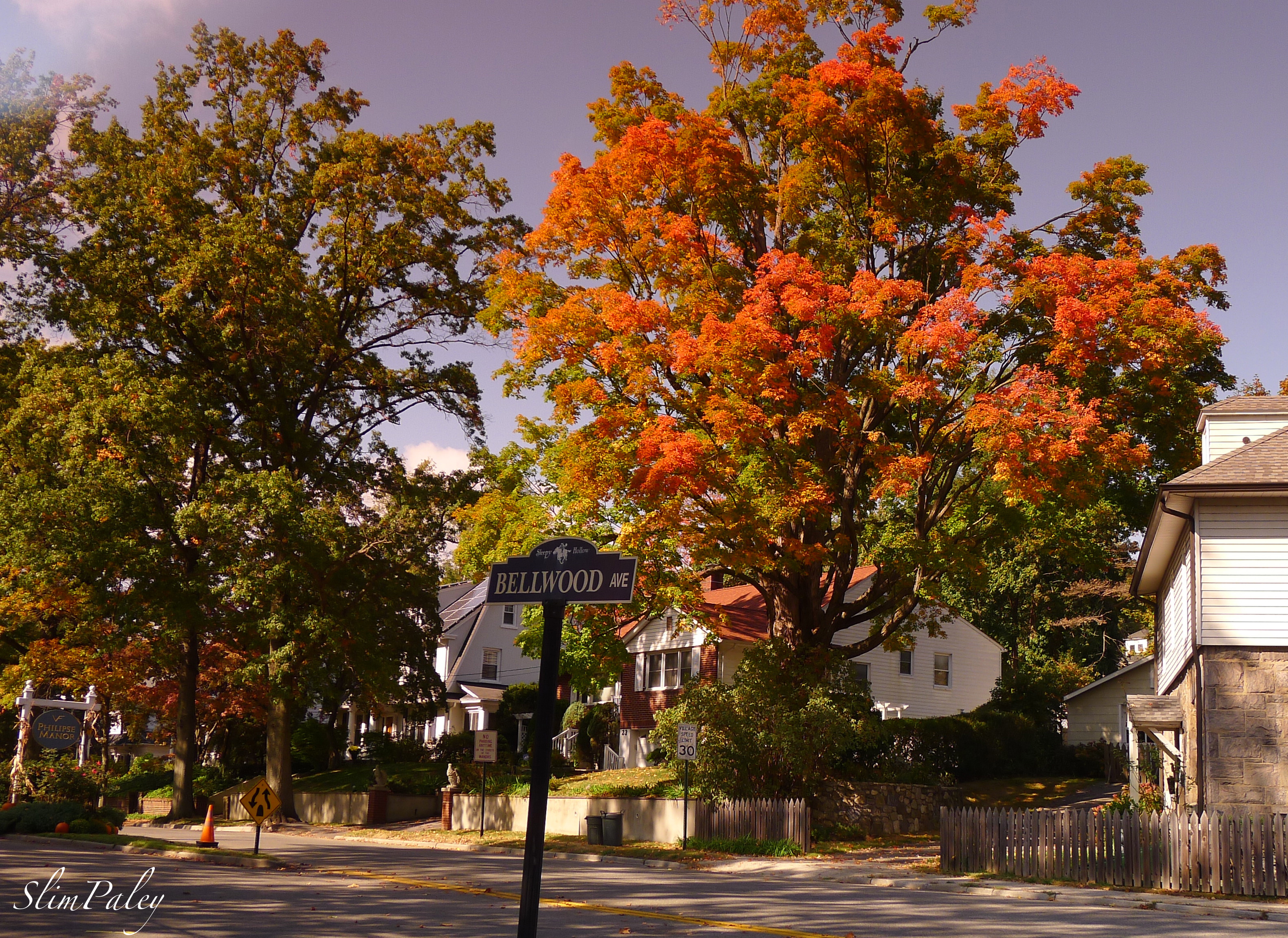 and the leaves were starting to turn in Sleepy Hollow. Does this look like a great Halloween street, or what?! 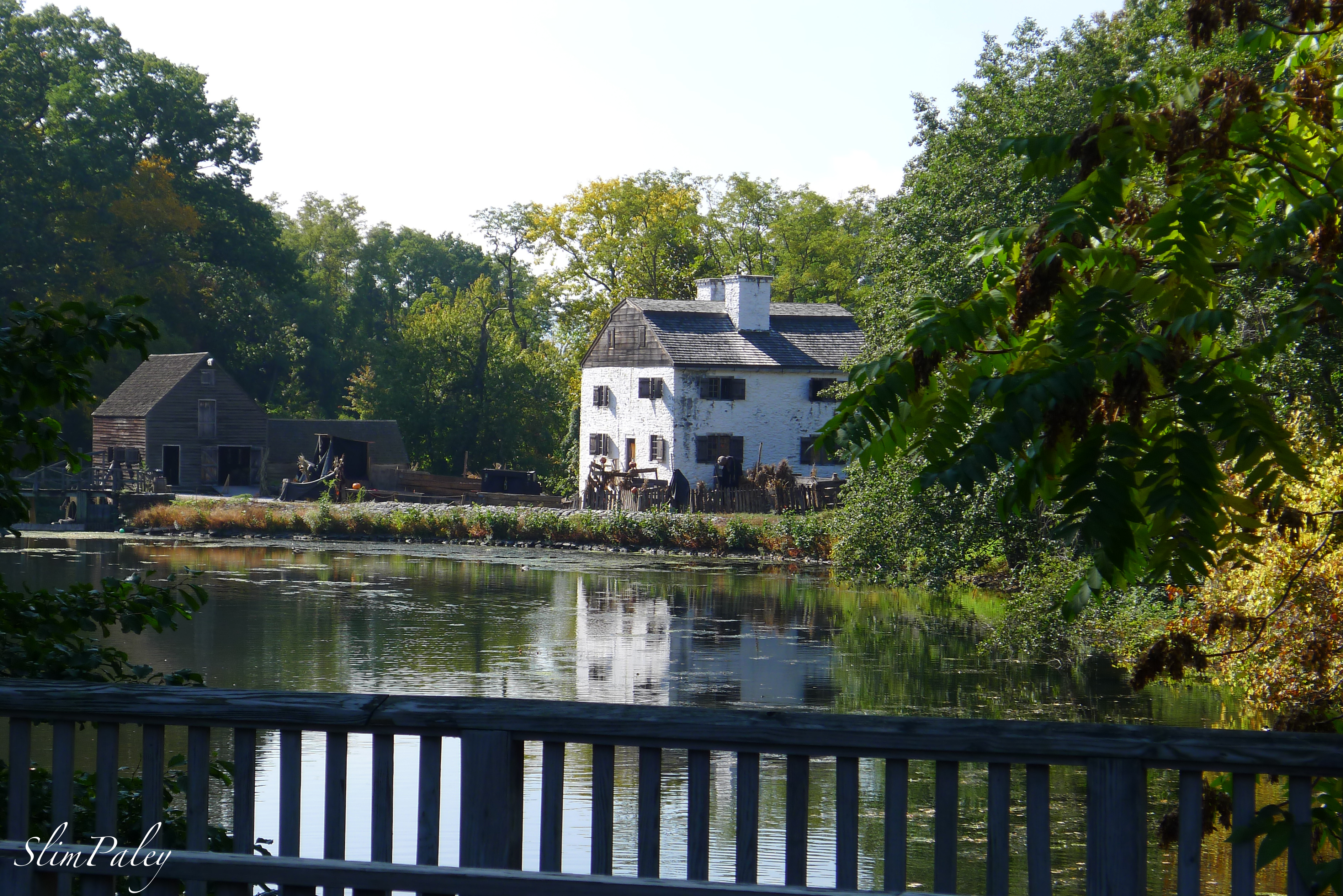 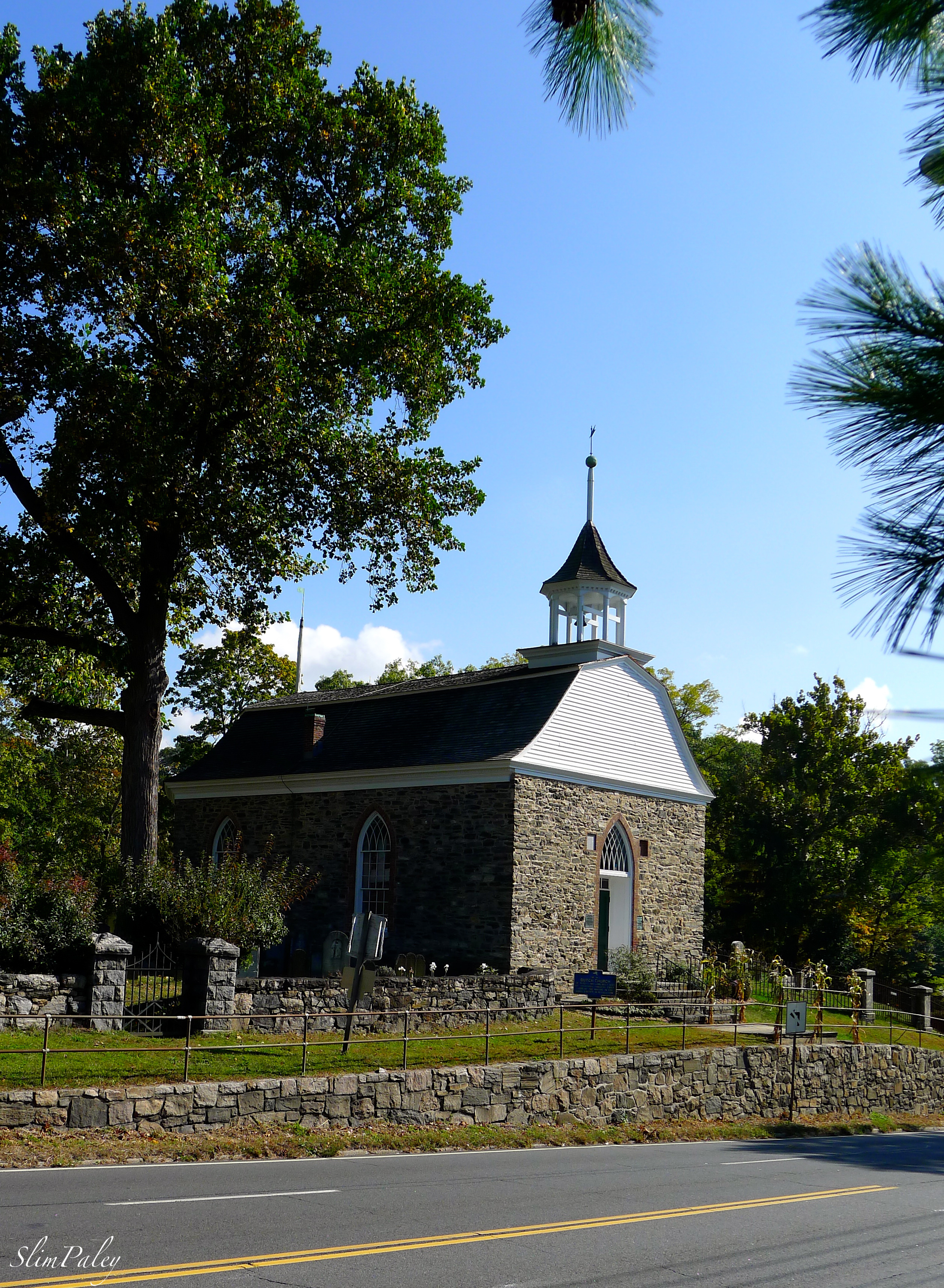 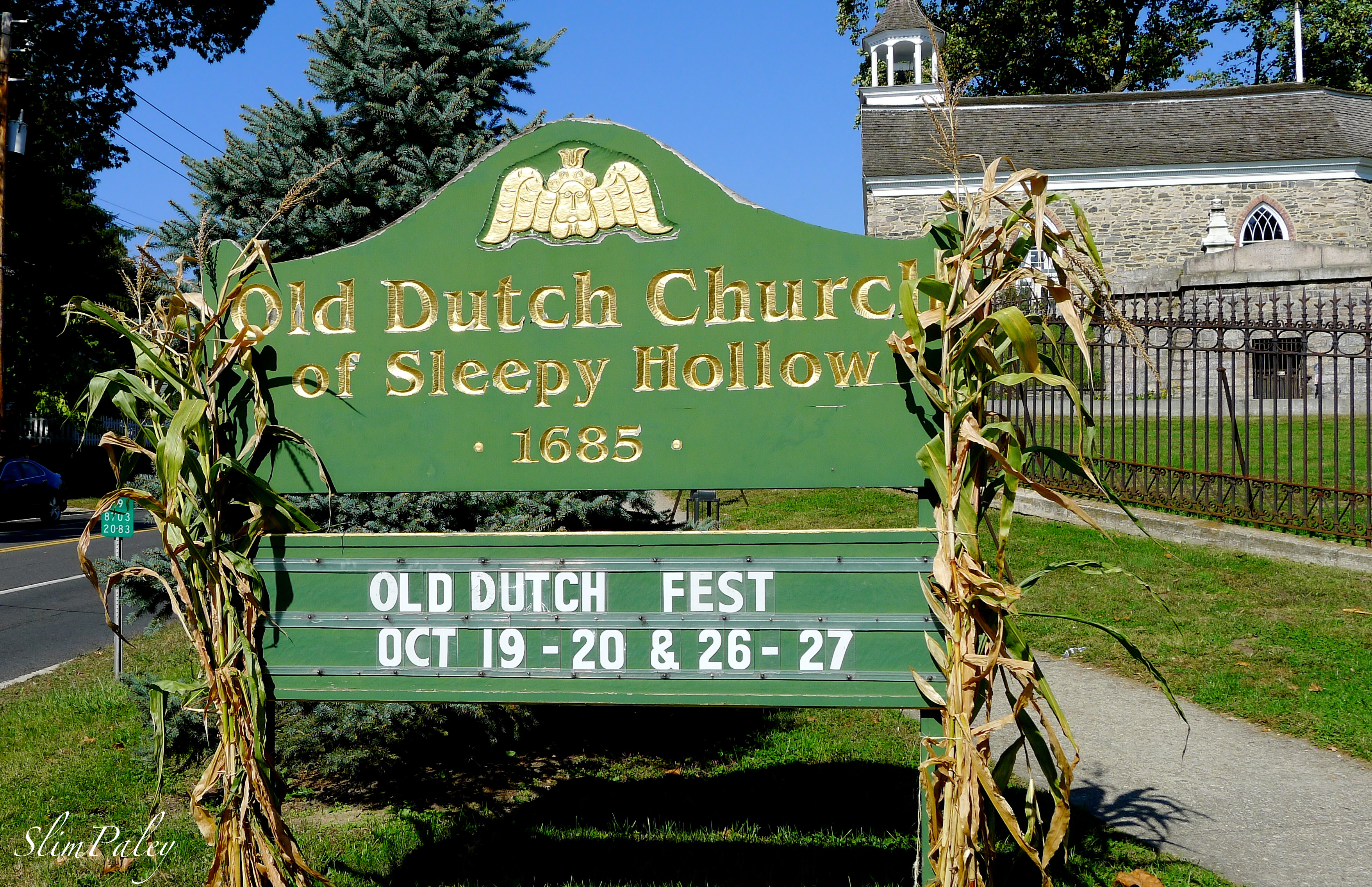 A three minute jaunt uphill from the Kykuit Tour meeting area and you’ll arrive at the Old Dutch Church. One of the oldest cemeteries in the country, it’s chock full of famous residents, including  Brooke Astor, Elizabeth Arden, Walter Chrysler, Andrew Carnegie, Washington Irving, and William Rockefeller. That’s some after-party. 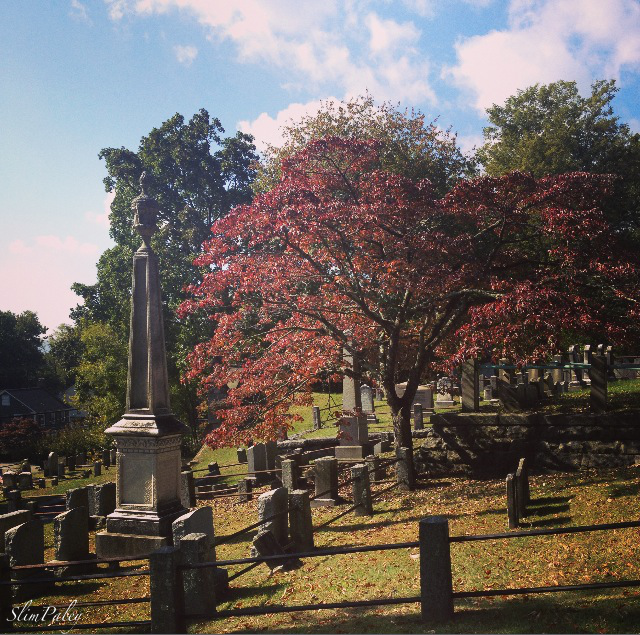 The legendary characters of  Washington Irving’s “Sleepy Hollow” are also buried here (including the ghost of the headless horseman who is said to ride nightly) We saw the tombstones of the Van Tassel family (Katrina from the story) amongst many other intriguing  headstones, ranging from Teeny-tiny to Wow-Now That’s Impressive. I imagine the guided walking tour here is quite lively. No pun intended. 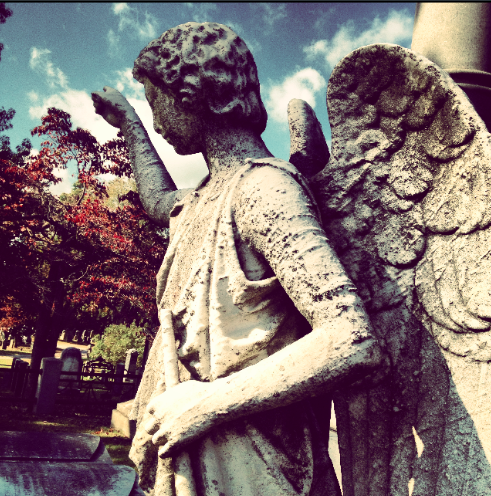 Nothing like a stroll through a cemetery on a beautiful day to remind you to seize The Moment.

Guided tours of the cemetery are held on Sunday afternoons from the last week of May through October.

The Kykuit tour is run by ‘Historic Hudson Valley’. Tickets are in high demand, especially at this time of year and should be bought in advance.  Trust me. 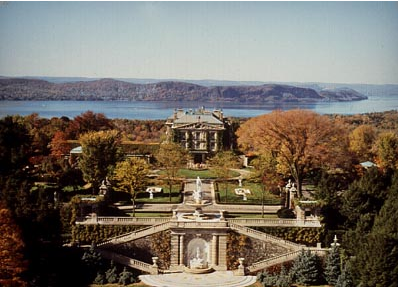