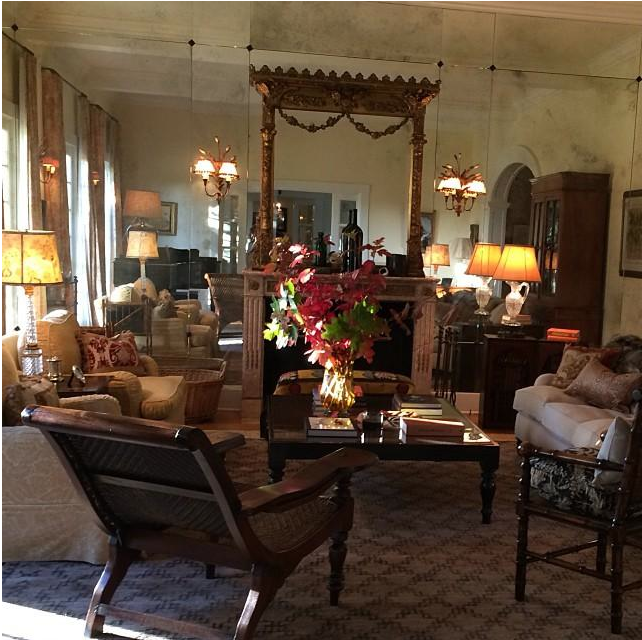 There’s a decidedly nippy quality to the air in Santa Barbara. I won’t go so far as to say it’s cold, but it has that bell clear, cinnamony, tartan scarf, pumpkin latte feel to it.

These beautiful leaves were gathered from my garden just 2 weeks ago when the temperatures were still flirting around 80 degrees. 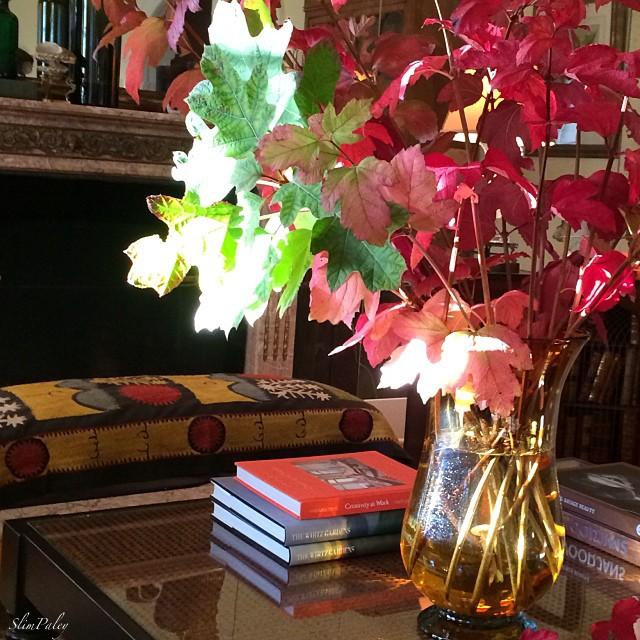 The colours were stunning. The Instagram photos don’t even do them justice, but alas, I can’t lift my big camera just yet.

BTW, you know one thing I’ll add to the “Post-Shoulder-Surgery Tip List” from last week??

#11. A glass of red wine helps before physical therapy. It helps a lot.

I just learned that yesterday. My genius is a slow, steady affair. It doesn’t like to rush in all at once and cause a big spectacle.

and just in case there are any doctors reading this-I’m not condoning drinking wine while still taking pain-killers.

Actually, that’s not entirely true. I’m saving my very last one for the check up with my surgeon on Monday. He’ll be putting me through my paces to see how much progress I’ve made with my arm extensions 🙁 (hold me)

I’m down to only 2 Alleve a day, but let me just say-the physical therapy is no day at Butterfly Beach. 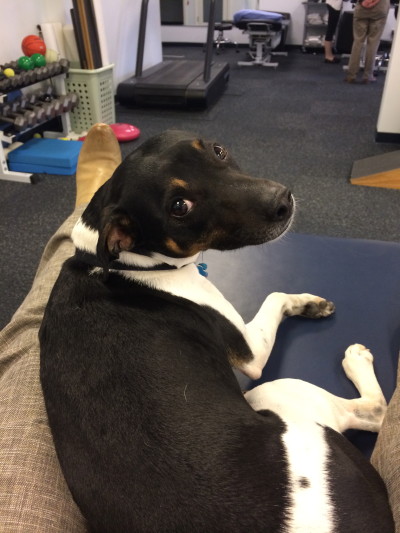 On the sweet side, meet ‘Leon’

He jumped up and gave me some tender, loving company yesterday afternoon while I was getting iced at the physio clinic.

Look at that face! He feels my pain.

May we also note it was the first day I wore trousers with no elastic at the waist. Hallelujah

So, basically, wine had to be served.

But, where were we?? Oh yes, we’re drawing very close to the holidays now.

In just a few short days, the time between Thanksgiving, Hanukah & Christmas is going to pass so fast it’ll peel our faces off.

So, how about taking just a little time for yourself and curling up with a good read?

The calm before the storm as it were.

I finally finished “Empty Mansions” and would definitely recommend it. 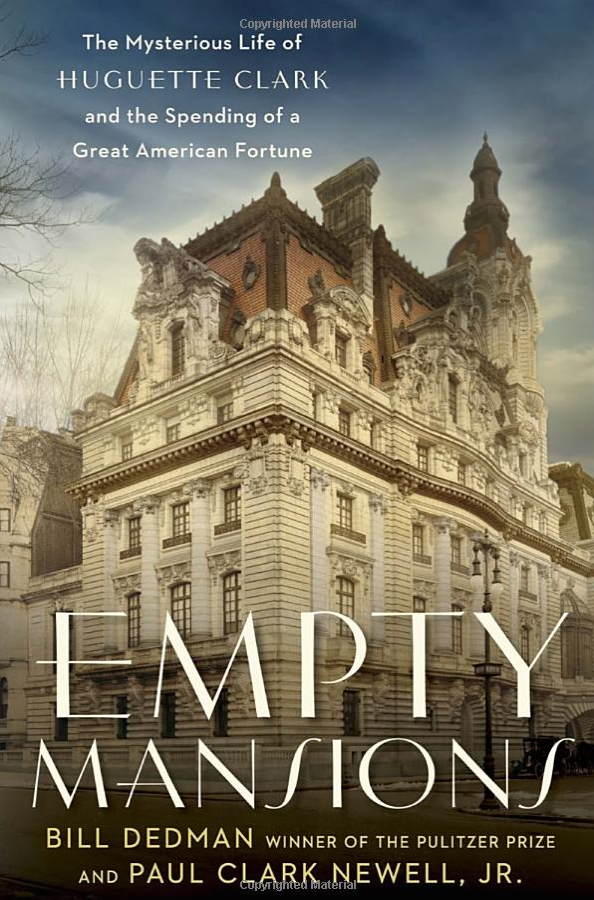 Although it would be more than a stretch to write reclusive American heiress Huguette Clark’s eccentricities off as mere peculiarities, after reading this new biography by Bill Dedman and Paul Clark Newell, Jr. I don’t know that anyone would come to the conclusion that she was crazy either.  Sadly, many of her extended and long estranged family (all descendants of her father’s children with his first wife) tried to prove just that-or at least, that Huguette was not of sound mind towards the end of her (105 yr.!) life. After nearly two years of litigation concerning the $300million+ remaining fortune, the lawyers, family and various participants reached a settlement just two months ago.

I won’t spoil the ending for you, but the story of Huguette, her immediate family and some of the people she chose to have in her life is indeed a head-shaker.

Of particular interest to me, and no doubt many other locals, was Huguette’s stunning Santa Barbara mansion below. 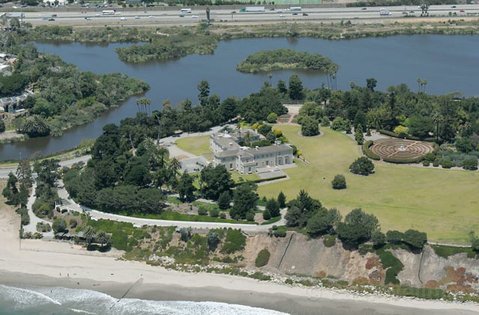 “Bellosguardo” presides over the last ocean cliff separating Montecito from Santa Barbara, capturing panoramic views of both the mountains and the sea, to no doubt breathtaking effect. The estate was built by the preposterously rich, copper mining Clark family in the 1930’s as a summer residence and is “The House on the Hill” of our little hamlet. 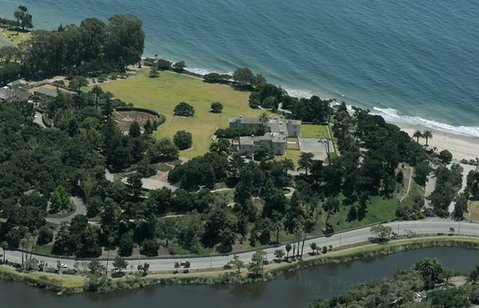 It’s actually so close I can walk to it from my house. My doctor’s office is just to the left of the bird refuge/lagoon you see on the lower edge of the property. Huguette built the refuge as a tribute to her deceased sister.

The entire estate, as well as a large ranch in the Santa Ynez Valley, passed to Huguette when her mother died in 1963.

Neither of them used the house in over 60 years.

Not once. Zero. I used it as much as they did.

Some years back, Ty Warner, owner of the Beanie Babies, Four Seasons Hotel NY, The Biltmore & San Ysidro Ranch and whose private residence is extremely close to Bellosguardo purportedly offered Ms. Clark $100 million for the property. She politely declined. 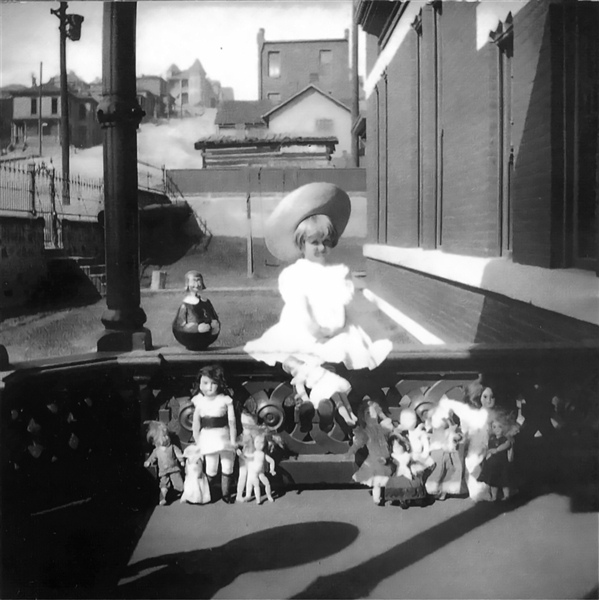 Huguette was a child-like woman who owned several vast homes yet chose to live in a small, spare hospital room (in very good health) for the last 20 years of her life.  Until the day she died she seemed to prefer the company of dolls to humans, but was unfailingly polite, charitable and kind to everyone she came in contact with.  She loved music, cartoons and everything Japanese, yet never visited Japan. She was an accomplished artist, loyal correspondent and friend, devoted daughter, loving sister, and generous patron of the arts. 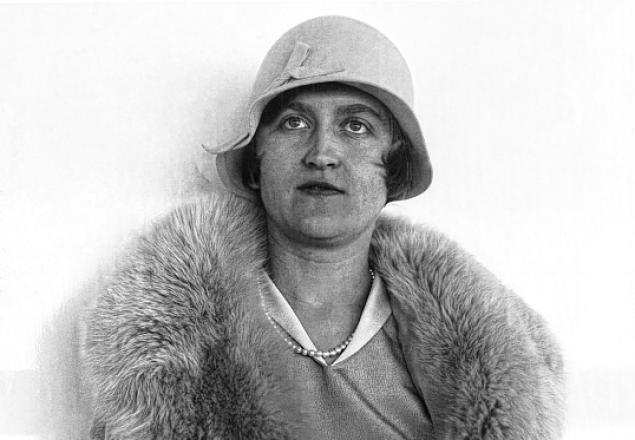 This last known public photo was taken on her honeymoon in 1928 at the age of 22. I believe she was probably much prettier than the photo would suggest, but she was extremely uncomfortable being photographed. No Selfies for ‘Hugo’ .  Privacy was everything to her.

Everything. Greta Garbo was Kim Kardashian compared to Huguette.

She and her husband would be separated only 9 months later and divorced within two years., yet they remained friends until he died.

Those who knew her best said she was shy but not at all unhappy.

STOP  me before I tell you any more of the story! gawd.

Personally, I think she just wanted to live in the world completely and utterly on her own terms and had the limitless resources to do so.

Apparently a recipe for a very, very long life indeed.

Is that so crazy??

PS. I imagine this would make a great Book Club read. (even though I’ve never been in a book club) 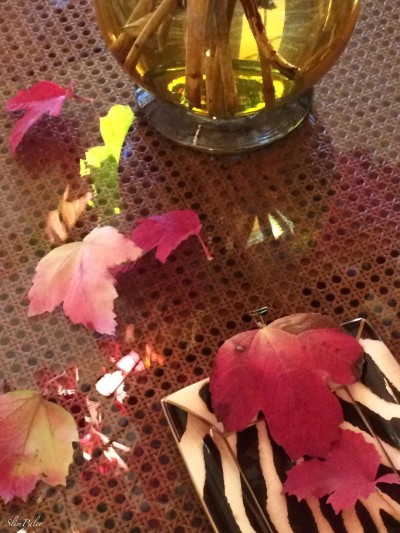 Enjoy the rest of your weekend and remember…

Don’t stress!! It’ll get done, it will all get done.

Flash from the past; One year ago today; The Day After